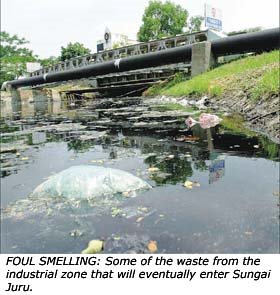 Residents and the fishing community here are exasperated over the indiscriminate discharge of industrial waste into waterways leading into Sungai Juru. "The river is dead... no marine life can survive in such polluted waters.

The pollution is not only affecting our livelihood, but we also fear for the health of our children who sometimes swim in the river," said Latib Muhammad, chairman of the cockle breeding project.


Checks by the New Straits Times showed the waterways were so polluted that it was impossible to walk near them due to the foul smell.

Latib said some 250 fishermen and cockle farmers in the area were suffering declining catches because of the pollution.

Another cockle farmer, Abdul Razak Hashim, 46, said the relevant authorities like the Fisheries, Environment and Drainage and Irrigation Department, were aware of the extent of pollution in the area.

"However, everyone seems to be ignoring this problem. They seem to think that it is better to take care of the interest of the investors rather than to care for our natural resources, like rivers."

Meanwhile, Consumers Association of Penang legal adviser, Meena Raman, said the Department of Environment should take immediate action to check on the pollution.

She said CAP surveys had shown that the pollution at Sungai Juru and Sungai Kerian was worsening.

"The amount of toxic waste being discharged by the factories into the rivers has been increasing over the last 10 years."

The problem has affected the livelihood of the fishing community to the extent that their income has decreased by almost 60 per cent."

For someone like myself who has seen how the rivers and streams in my home island State of Penang slowly but surely die away due to the unending pollution caused by so many factories and workshops flushing away toxic, foul, corrosive affluents and discharges into them as they please compounded by the continuous apathy of the State Government of Penang since the 1970s, makes me seethe with extreme anger and disgust at those who call themselves Chief Ministers, Presidents of the City Council and Director General of the Department of the Environment of this fast deteriorating former island paradise!!!

The Sg. Pinang river in the Penang Island is now a stinking, brackish, open sewer , dead of all forms of riverine creatures and polluted to a state of almost no return!!!

If you were to ever fall into the river, May God help you for all the fragrant soaps in the world will not be able to remove the stench that would stick to you from the pollution in that open river turned sewer!!!

The political eunuchs sitting on those seats of power and authority have committed extreme and criminal breach of trust to the people of Penang by not enforcing the Environmental Laws that are already there since the days of the British Colonials!!!

Each sentence that I type here has these 3 exclamation marks !!! showing how distressed, how sad and how bloody angry I feel to see another of our once pristine, full of life , green clear rivers of my home state be neglected by all those fellows who don't give a damn to the lifegiving rivers and water resources of this state! 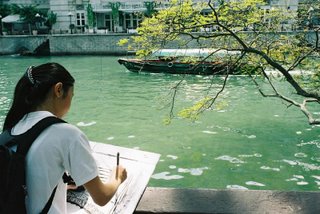 Singapore successfully rehabilitated the once polluted Singapore River by prompt decisive action and today that river is once again full of all kinds of fishes and riverine creatures!

The Singapore Government may come across as a strict, authoritarian, iron fisted government but their successful administration and governance of that small island republic is a shining example of how correct management and preservation of resources and the environment has become a symbol of national integrity that should shame all the idiots holding power in Penang!!!

If only Lee Kuan Yew could come take charge of Penang during his remaining years of his exemplary life , I guarantee you that my beloved Pearl of the Orient Island will shine and glow once more!!!

Look at how green and healthy the Singapore River looks in the picture above.

I remember seeing the now dead Sg.Pinang looking exactly like this back in the 70s!

Today, another of this country's river is dead and turn into a stinking sewer because the Chief Minister, MPPP President and the Director General of the Jabatan Alam Sekitar have turned blind to the disaster and are doing nothing to reverse the destruction taking place in the island's water resources!!!