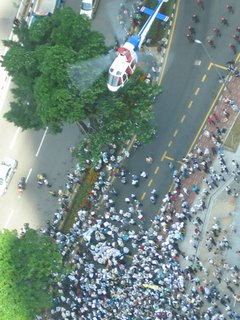 I thought that the BN under Abdullah Badawi is a bit more tolerant in allowing the citizens more leeway in voicing out their frustrations against matters that cause them hardships like the recent drastic petrol price hike imposed by the BN @ Badawi Najib Government!

Everyone was saying 'Aah! At last..we have Mr.Nice Guy running the show..now we can speak up freely and exercise our Constitutionally guaranteed rights of free speech and right to gather..'
How wrong have the citizens been proven!

Last Sunday, the 26th of March,2006, the people of Malaysia especially those in the Opposition learned the hard way that 'hello!!!!! We will say all that we please but if you ever try to be funny..be prepared to be smashed to bits and water cannoned to Pudu Jail!!!'

I seriously think Pudu Jail is going to be there forever. What with the Opposition now actively protesting every other week. Hold the demolition orders! Pudu Jail stays! The 'BN' needs it!

Journalists from all over the world are now coming over to KLCC with the hope to catch the latest 'Law & Order' demonstrations being meted out by our Men in Red Helmets to those Champions of Democracy in the Opposition!

The idle water cannons of the FRU are now back in good, working order and the Twin Towers got a free hosing down on Sunday together with so many fellows who surely must have missed their Sunday morning showers!

Blogger at http://blog.activehack.com/?p=169#more-169 has graciously put up a very clear videoclip of the protest and shows all that he was lucky to get on tape for the whole world to see.
The protest organisers however failed to keep their protests on theme and resulted in their being smashed and bludgeoned by our tough guys in red!

If you view the videoclip, you can see and hear the protesters shouting ‘Reformasi’ and other things not connected with the topic of the demo!

Shouting ‘Reformasi’ is a big ‘come on’ to the FRU for it is that very phrase that gives the FRU the green light to smash up the protest!

After all these years of protesting, surely the Opposition should have learned that they need to keep their protests organised!

The posters should be properly streamlined and conform with the matter being opposed!

Do not stray away from the topic! Shouting ‘Reformasi’ is only asking for trouble!

During the heydays of the Reformasi protests where the crowds were upto hundreds of thousands, did it topple Mahathir’s government?

Protesters ended up smashed and bloodied and hauled off to jail while the fellow they were all demonstrating for ended up taking a motorbike ride to safety whilst the masses were being beaten up, punched, kicked and baton whipped by the SB,FRU and the PDRM!

Learn from History and try being better organised! No point in letting things get out of hand!

The worthy cause being fought for ends up neglected, battered and bruised along the drains of the capital’s streets for the organisers weren’t organised at the end of the day!

22 protesters ended up in Pudu Jail and enriched the BN's coffers by paying RM3000 each to secure bail but will face future music from the law soon! 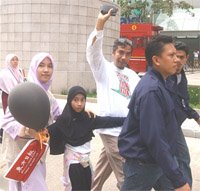 One of those arrested was Dr. Hatta Ramli , Central PAS's Treasurer!

That fella was not being wise when he brought along his 9 years old daughter Amirah and 17 years old Atiqah teenage daughter along with him for the protest!

Talk about endangering your children! Is he plain stupid or what?


What can he do if the FRU in their crowd control smashing and bludgeoning of the protesters end up breaking open those young kids skulls in the process?

He is grossly irresponsible in exposing his young daughters to such dangers! Luckily such disastrous harms didn't come to those kids but I read that his daughters ended up being arrested together with him!

Imagine the emotional trauma those girls went through that day! Terimakasih Abah !!! Sheesh!!
I support the protest but regret to see such a sloppy demonstration that when let loose only brings further damage and destruction to those brave souls who were out there!

Protests such as these are a sign that the people are unhappy with both Badawi and Najib @ the 'BN'.

The thing is that we all know that when the General Elections come, the people of Malaysia will unfailingly return the same BN government to power with a 'landslide victory'!

So, hello.....is there any point for all these protests?

Malaysians are proven, times and times again through the years to be the most docile citizens of South East Asia if not the world!!!