The Balfour Treachery-Robbing the Palestinians of their lands 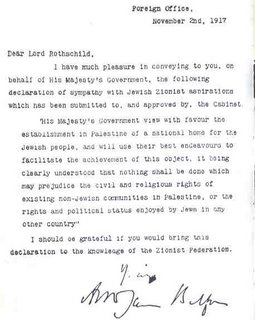 When we talk about the Middle East ongoing conflict, we seldom bring up the root cause of all the decades of violence caused by the very perpetrators in the form of the British Imperialists!

Palestine is the ultimate sacrificial lamb of the British Government who invaded and occupied the Arab lands of the Middle East way back in the 1800s.

The Jewish Zionist Federation were being too much of a headache for the British and the Americans back then and the weak divided Arab nations proved to be a blessing for the Brits and the Yankees to ship out the bothersome Zionist Federation from their countries to the 'promised' lands of Palestine conveniently!

Look at this document signed by the criminal robbing the Palestinians of their lands!

Not many people realise that the situation in the Middle East is largely the handiwork of the treacherous British Foreign Secretary Lord Arthur James Balfour who promised the Jewish Leader Lord Rothchild , Palestine as the abode of all the displaced Jews scattered all over Europe and in the United States of America!

I am not making these all up. Come read for yourself , historical evidence showing all in detail complete with the proper references.

The failure of the Ottoman Caliphate to persevere and protect the Muslim Empire opened up a golden opportunity for the British Foreign Secretary Lord Balfour to surrender Palestine on a silver platter to the troublesome Zionist Federation who were growing too strong and too large for the British and Americans to handle.

Today, we see the Middle East being invaded, occupied and robbed of their natural resources by the same criminals in power in both the USA and the UK!

The Middle East are rich in oil and other resources. If not for the riches in the bowels of those lands, the murdering legions of both terrorist armies won't be camping out pillaging the lands of the Arabs!

The Arabs continue being weak and divided till this day hence they are continuing to suffer from their egos and disunity!

The filthy rich Arabs splurge and spend the wealth that Allah ,God Almighty gave to them as a trust to help the Ummah on luxuries and excesses beyond the wildest dreams of any Bedouin or Tuareg nomad roaming the scorching deserts of Arabia and Africa!

One does not have to be a genius in finding out that since time immemorial, the various tribes and kabilahs of the Arabs have never really united as one and continuous bickering amongst the many nations of the Arabs is so well known and their enemies from the West are just so happen to have the Arabs divided and conquered till Kingdom come!

The whole world knows that the Middle Eastern Arab nations are very, very rich in oil resources and that the only reason that the region is suffering from all the wars and strifes going on there is because the Arab leaders are ignoring their neighbours and don't give a damn about anyone else as long as they get to live in luxury and stay separated from each other.

When are they ever gonna realise that by continuing to be separate, the future for Palestine is hopeless!

The OIC is just a bloody sham! All they do is just have conferences after conferences while the Palestinians and Iraqis are bombed to bits by the occupiers!

The Hadith of the Prophet Sallalahu Alaihi Wassallam regarding the sorry state of affairs of the weak and divided Ummah of the Last Ages has come to pass and proven to be true!

Damn the weak and corrupt 'bleeders' of the Muslim world of today!

When are the true leaders ever gonna emerge to lead the Ummah to a better future? When?

Just like most of us , I am praying that it will be soon...very soon. Insya Allah!
Published by MAHAGURU58 at 2:40 PM