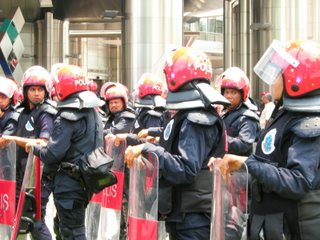 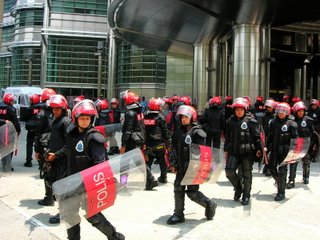 We all notice how the recent protests and now weekly demonstrations by the Malaysian citizens are fast growing into recurring headaches for the FRU!

These Federal Reserve Units who as the Anti Riot stormtroopers of the Royal Malaysian Police are the very symbols of the frontline of the various iron fisted 'citizen bashing' terrorising machinery under orders of the BN Government!

I know that this topic is taboo all this while but I have always tried to look at any problem from both sides of the coin.

Have we ever wondered about the tremendous emotional turmoil these fellows go through when they are ordered to face the Malaysian citizens on the streets of this nation whenever a protest or demonstration takes place due to certain matters or issues that the average Malaysian citizen is not happy about?

This protests are because the present and even the former governments fail to take into consideration the impact their policies have upon the people before implementing any cockeyed policy they come up with to try and salvage funds for their interests or protect their backsides after screwing up in the administration of this land!

Unlike in America, where we know many of those working in such jobs are regularly referred to the psychiatrists for treatment of stress and mental dementia that usually creeps into the soul and mental faculties of any normal humanbeing continuously facing extreme pressures and emotional ups and downs as a result of facing all the dangerous life and death situations in the course of performing their job functions, the FRU here have to cope with the stress of their jobs on their own!

If they can balance the pressure building up in their heads whilst being the BN's tool to smash and force the civilians to submit and shut up, then they would be alright in the long run or eventually end up in the mental asylums of Tanjong Rambutan, Perak!

Luckily for the FRU of Malaysia's Police Force , Malaysians are not known to carry dangerous weapons, firearms, knives or machetes unlike some other troubled countries of the world!

Most of the harm that takes place in any protest or demonstration here in Malaysia is inflicted by the FRU themselves upon the unarmed Malaysian citizens who are forced to be out there in the streets exposing their life and limbs to certain harm , injury and possible death all because of certain 'leaders' who have exhorted them to go out in the streets and protest whilst the very ones who were calling for the protest would usually be either in the safety of the masses or cowardly hiding behind a phalanx of their supporters or even worse still disappear into thin air the very second the FRU start flailing their truncheons , batons and cudgels upon the hapless Pakcik or citizen who is holding a cardboard poster condemning the Supreme Leader of the BN for his screw up!!!

It's a classic 'Cucumber against the Durian' situation we have here in Malaysia!

We the citizens are the bleeding fragile 'Cucumbers' easily snapped or crushed by the FRU who are the 'Durians' forced upon us whenever we are brave enough to voice out against the BN!!!

But let's look at the mental trauma that I know takes place in the minds of the fellow in the red helmet with the title of 'POLIS' clearly written and covered up protectively in his or her body armor from top to toe!

Sure, the FRU is not the one who is going to face 'danger' from the protesting public but I am sure that all that takes place during a violent riot @ naturally induced or sparked off by Mr.Agent Provocateur naturally will have an impact on the FRU personnel!!!

I figure that the fellow who smashes some poor citizen's head bloody or kills the person in the process of carrying out his or her duty as ordered by their superiors will forever be tormented in their screwed up souls eventually till the day they die after retiring from the force!!!

Has anybody thought of this ?

I also would like to ask the fellow who calls for any protest to have the balls to be right there in the front of any demonstration or protest to show that you are truly a gentleman warrior fighting for the rights of the people as a just leader worth your name and never run away the second all hell breaks loose!!! 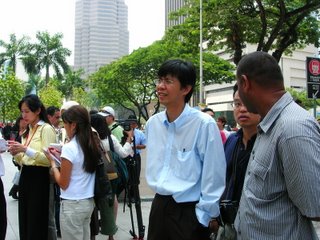 We also know that Tian Chua, is the only
Malaysian Opposition leader worth taking note for all the damage he has suffered during the various demonstrations and protests he has taken part in his colorful political career!

This Malaysian citizen has been illustrious for having the balls to face up to the mighty brutal FRU during his many protests than any other Opposition leader worth considering a thought!


Tian Chua may not be a glamourous opposition figure but to those of us who follow what's happening in the nation's political scene sure know what he is capable of. I pray that Tian Chua will never trade in his principles for any amount of money that anyone might offer him in order to induce him to shut the hell up!

There is a Hadith of the Prophet Muhammad (pbuh) where the Prophet foretells the current situation in our world! :' There will come a time in the Last Ages (now) where the women will be dressed but naked (all the flesh exposing being done by today's women while dressed) and there will be those who hold whips and flog the people!' @ (today's oppressive governments using force upon the citizens) like the BN using the FRU to force the people to shut up and submit to their will!

Ponder on that ! All that is taking place today is exactly as the Prophet (pbuh) has foretold.

The FRU being the 'whip' of the BN unfortunately are seriously caught between the BN Devils and the unhappy Malaysian Citizens Deep Blue Sea.
Published by MAHAGURU58 at 5:19 PM