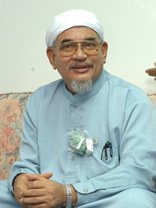 A blogger emailed me yesterday asking me why the Opposition seems not to be making any progress in their efforts to seek justice by protesting against the excesses of the BN and why the protests usually turns nasty and loses its purpose!

This is my answer to him. See if you too agree with my points of view.

The Opposition parties are mostly disorganised and the top leaders are usually comprised of UMNO rejects or former Semangat 46 political wannabes who have now morphed into Parti Keadilan Rakyat.

PAS is mostly made up of those who are against UMNO's Assabiyah principles and only the very cream of the crop are a bit learned in Islam. Even then, they are mostly very individualistic fellows and harbour grandeur ideas of being the PM of this nation.

The majority of PAS followers are kampong folks who are temperamental and easily worked up into a frenzy by anything they deem offensive to their limited ideals of what an Islamic nation is to be.

They are very racist in attitude and usually waste their time smoking palm leaf rolled up cigarettes at the local 'warong' or coffee stall. Not many of them are intellectuals and most do not really know what the basics of Islam is about.

All these observations are from my years of da'awah activities and coming to know them closely. They are very obstinate and refuse change. If you try advising them, the chances are you'll immediately be shunned and they will not want to sit near you anymore.

Parti Keadilan Rakyat came into being for the sole reason of getting Anwar Ibrahim released from prison. During Dr M's tenure, the chances of that being realised was zero! Dr.M would rather see Anwar die in prison than have him released because all the feedback Dr.M was getting from his network was that Anwar was ready to spill the beans and destroy Dr.M's legacy at all costs.

We all have read and come to our own conclusions as to whether Dr.M is right or Anwar is sinfree. We all know that politicians ,no matter who or from whichever party surely have skeletons in their individual closets. All of us do. No one's that holy moly!

So, the minute Anwar got released from prison under Badawi's watch, the PKR sort of lost their drive and are reduced to being the dirt trap for all the UMNO hasbeens or rejects .

Some of the chaps in PKR are true genuine politicians as in the persona of Tian Chua. I admire Tian Chua for his resoluteness in walking his talk and his bravery in facing up to the mighty FRU every time there's a protest or demo that he is involved in . I am not saying Tian Chua is a saint or something. It's just his guts that I admire. Period.

So to me, PKR comes across as a party that has lost it's mission. The fellow whom they were rooting for is out of prison and free as a bird. To save face, they have to keep on going. For how long, only God knows.

The DAP are mostly Chinese nationalists. They are very communal and seldom want to liase with the Muslim Malay Opposition parties because they are totally against the idea of the PAS and PKR's vision of setting up an Islamic nation. DAP stalwarts like Karpal Singh and Kit Siang are already very senior citizens and really need to retire in peace. There's just so much opposing these chaps can do. Time to rest and play with the grandkids.

All this incompatibilities result in a divided Opposition hence the lack of coordination and joining forces in even organising a protest or demo.

The result is as usual. Disorganised and chaotic protestors each coming up with their own concocted poster or statement totally out of topic and visibly very,very clashing views.

Being used to shouting 'Takbir!' and the response 'Allahu Akbar!!!' fervently by the Muslim PAS members scares the shit out of the DAP fellows and thus makes the whole demo turn unruly!

PKR diehards then further deteriorate the situation by their salvos of 'Reformasi! Reformasi! Reformasi!' igniting the intended 'peaceful protest' into a dangerous riot like atmosphere giving the FRU the signal to go in and break up the protest!

Year after year after year, this scenario is played out and when the protest goes helter skelter, the same old complaint rears its head in Harakah and the Rocket or now as we have it, the Suara Keadilan from the PKR!

If you want to know why the Opposition parties are not making any headway in Malaysian politics, it is none other than the wide and glaring differences they have between them and the lack of the 'Esprit de Corps' spirit! As the Malaysians say it' Tak boleh ngam punya! meaning
'Can never be as one!'

The BN enjoys its monopoly in running the Government of Malaysia because the Opposition can't unite and present a real challenge to them.

As long as they remain divided and can't compromise between them, the BN is free to do as they please and each and every BN politician has that big, wide, satisfied smile curving up their faces as they get fat and fabulously rich gorging on the Malaysian dream.
Published by MAHAGURU58 at 10:38 AM