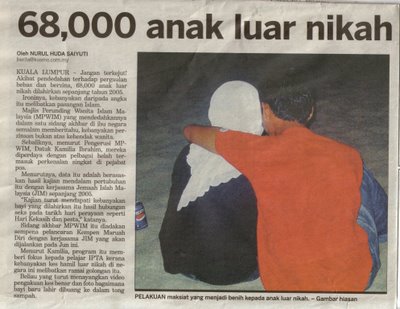 This is what the Kosmo tabloid newspaper reported last Wednesday in it's 19th of April, 2006 edition.

Quite a shameful achievement by this nation's university and college students not discounting the kampong girls who are the main culprits for this illegimate addition to the population of Malaysia!

I don't think this is what Tun Dr.Mahathir had in mind when he voiced out his dream to see a population of at least 70 million Malaysians by the year 2020!


Neither do I think the present 'Islam Hadhari' champion in the person of PM Abdullah Badawi wants as the achievements during his watch after taking over as the nation's top leader!

It's disgraceful to their aspirations to stand proud as the world's champions of Islam and as the current leader of the OIC! It's more apt to term the OIC @ Organisation of Islamic Countries to just ' Oh! I See!'

68,000 bastards! What the hell is happening to this nation's young Malays? Are they so bloody stupid as not to realise what a disaster they have caused to the nation's image as a so called 'Islamic Nation'?

Those mothers who gave birth to all these bastards are said to comprise of largely the 'IPTA' students. 'IPTA' meaning 'Institiut Pengajian Tinggi Awam' in Malay carrying the meaning Public Institution of Higher Learning.

These are university and college students. Supposedly the future leaders of this nation. To say that these young people are stupid is definitely wrong yet to claim that they are clever , damn..these 68,000 bastards are not something the nation can be proud of!

All the brouhaha that this nation is fast turning into a 'Taliban' style administration couldn't be further than the truth!

The recent fiasco of the DBKL turning into vice squad stormtroopers by taking action against a Non Muslim Malaysian Chinese university students couple act of kissing in public is like a classic blooper of zeroing in on a distant mosquito and missing the broad (68,000 bastards) elephant's backside right up their face!

What does JAKIM, JAIS, and all the various champions of freedom of this and that like the notorious Sisters in Islam and all the three ex and current PM's daughters have to say about this expose by Kosmo?

68,000 'anak haram'produced by the Malays is not something that the 'Islam Hadhari' government of PM Abdullah Badawi and Najib Tun Razak can sweep under the plush carpets of Putrajaya!

I gather that the KIMMA Mamaks should rethink their demands to be classified as Melayu's by this shameful achievement of their brethren's offsprings. We don't hear such records achieved by any of the other ethnicities of Malaysia.

Wonder whether this record will make it into the Malaysian Book of Records?

Melayu memang Boleh!.......Boleh Lingkop if these adulterous behaviour of the lustful young Malay idiots are left to fester uncontrolled as it is today!!!

So, what do the boisterous Sisters in Islam and their patrons in the persons of the 3 daughters of the current and ex Prime Ministers of Malaysia are gonna do about this?
Published by MAHAGURU58 at 4:37 PM