Gubra, an attempt to brainwash the Malaysian Cinemagoers 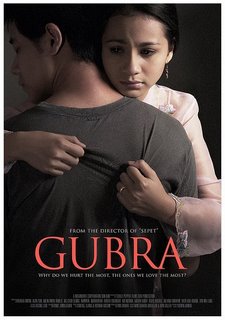 The current trend of Malaysia's Malay film industry is to come up with outrageous and provocative story lines such as the one's produced by Yasmin Ahmad, the current 'hot' film director in the media limelight.

Professor Razak Mohaideen's films even though considered to be run of the mill love stories are still not as crude and corrupted as the values being bandied by Yasmin. Not to say that such films are better for the development of social comment or beneficial to the public in the long run, we can still watch his films without feeling revolted by crass behaviours of it's main characters.

Novelist Faisal Tehrani exposes all the crude behaviour being expounded by 'Gubra' where Islamic values and traditional norms practiced by Muslims go down the drain in this blasphemous film that ought to be thrashed into the dustbins of the nation!

I saw Sepet and wasn't really impressed by the storyline! That film extols sexual connotations and is an attempt to introduce an atmosphere of loose morals into the Malaysian traditional family life.
True, such things are now becoming common in families that are not practicing good family values according to the tenets of Islam and Malay cultures.

To push such screwed up values as something worth watching shows the sordid agenda being brainwashed into the Malaysian cinemagoers under guise of expressions of the current Malaysian lifestyle!

I support Faisal Tehrani a 100% in his condemnation of such low class fare being pushed by this film!

Gubra is not worth your time and effort to go watch such crap! What the hell is FINAS doing?

They should ban this movie! This is what I think! To those who like such filth , well to each their own but to me this is pure BS!

Making films to help mould a good Malaysian society that is based on good religious values and social foundations would be a boon to the future of this country for through good supportive film media , we can help the nation to be a better place for all but to push through a loose screwed up agenda such as this filth deserves all the condemnations we can come up with!
Published by MAHAGURU58 at 7:18 PM