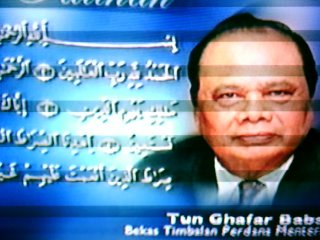 Today, 2nd of Rabi'ul Akhir, 1427 Hijrah , the 23rd of April,2006 at 0735am, the former Deputy Prime Minister of Malaysia, Allahyarham Tun Ghafar Baba died due to lung and kidney complications at the Gleneagles Specialist Hospital in Ampang, Kuala Lumpur.

Arwah Tun Ghafar was 81 when he died.

Ghafar Baba was a classic case of a poor kampong boy who after strugging through poverty finally made it right to the threshold of the Malaysian political supremacy!

He was not a glamorous political bigshot and shunned the limelight and even refused to accept honors and titles offered to be bestowed upon him by the Malay Sultans until he retired from office as the Deputy Prime Minister in 1993.

Anwar Ibrahim was the man who screwed the late Ghafar Baba of his deputy prime ministership by rallying the Umno Youth Movement into supporting Anwar Ibrahim for the Deputy Presidentship of UMNO.

As a result, Ghafar Baba received few votes to keep him in power as the Deputy President of UMNO and the Deputy Prime Minister of Malaysia.

Today, the man is dead and after being given a not so fanfare filled funeral, is now interred amongst the nation's forefathers in the Warriors Tombs cemetery at the Masjid Negara in Kuala Lumpur.

For all his efforts, the man was denied premiership through the manipulations of a political figure in the person of Anwar Ibrahim.

Maybe , history has a strange way of justice for his nemesis was ungraciously kicked out of office a few years later and received a worse fate than him in the process.

Ghafar Baba, May you rest in peace. Al Fatihah!
Published by MAHAGURU58 at 5:49 PM