Bombs for Israel -Guess who's the suppliers? 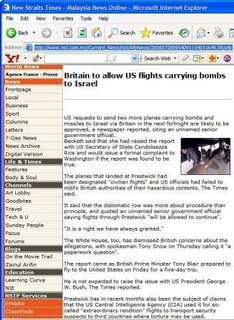 All this while, the Governments of the United States of America and the United Kingdom had been loudmouthing to the entire world that their's is the bastion of Freedom and Democratic values above all the rest of this world!

Day in, day out, these two countries impose their will upon others and quite frankly, these two have managed to oppress and dominate the so called civilised world into submission.

Countries of the world fear the USA and British for no other reason than that these two barbarian governments have the world's largest arsenal of military weaponry and wield extraordinary powers over the entire world!

When the Soviet Union was around, they had to contend that the Soviets could kick their asses and were capable of inflicting untold damages to both their countries.

When the Soviet Union disintegrated into numerous smaller independent countries, both the USA and Britain were jubilant knowing that now they can rob and pillage oil rich Middle Eastern countries at will.

Today, Iraq has been robbed, raped and sodomised by these two barbaric countries under guise of bringing Freedom and Democracy to the People's Republic of Iraq!

Bravo USA and Britain!!! You are truly the 'Masters of the Universe' ! Clap! Clap! Clap! Hooray! The Imperial Masters and Supreme Colonialists have done what they set out to do! World domination through nothing but terrorising others into submission!

Anyone who doesn't 'kowtow' to these two 'Sheriffs of the World' will see their nation's economy be held to ransom. We will impose sanctions on you. We will cut off trade and freeze your assets. If you do not spread wide open and let us come and rape you as we please, be warned that we might even send in our mighty Marines and Special Forces!

We can take you out with a precision guided missile in just a split seconds! You can run but you can't hide! Our thermo detecting infra red guided missile will come smash your ass into smithereens as we have done so many times in Iraq and as our beloved Israeli offspring have done to the Palestinians and now to the Hezbullah in Lebanon!

We are the Supreme Masters of this world and whoever dares to oppose us will be obliterated from the face of this Earth!

So, with no sense of shame and responsibility, we now supply all our weapons of mass destruction to our agent in the Middle East, to bomb all you Moslems to hell!

We will say one thing in the UN but we will blast to hell anyone who dares to say no to us! Surrender your countries to us so that we can help our sweet child, the Chosen People of Zion to create the Greater Israel after destroying all the weak Moslems of the Arab countries!

We are not scared of the OIC or Arab League! They are all a bunch of limpies with no balls to stand up to us! We will crush anyone who tries to mess with us fo we are the Champions of Freedom, Advocates of Democracy! Who dares to face up to us?

You can write in your newspapers, publish in your websites about us supplying bombs to blast all you Moslems to hell! We will not cease in our plans ! The UN can't do shit to us!

We are the champions! The Master Race! Bow all ye useless scums of this earth before us!

~~~ So is the reality of the roles that the United Satans of America and their British counterparts in supplying all those weapons of mass Moslems destruction!

Who dares to go wage war upon these two except for those who are called terrorists and rebel forces?

The question is who are the REAL TERRORISTS OF THE WORLD IF NOT THE UNITED STATES OF AMERICA AND ENGLAND?

And ASEAN wants to play footsie with Condoleeza Rice! Damn all these idiots who are useless good for nothing money wasters entertaining one another with music and fine dining while another country is being bombed to bits before their very eyes!

What is the use of having all these useless organisations? Verily, when these so called leaders of ASEAN,NAM and the OIC die, they will surely be destined for hellfire for not doing anything at all to stop the Israelis in the truest sense that is to go fight those bastards!

The Zionists know only one language! An eye for any eye and a life for a life!

Remaining as these idiots are, they will be better off bending over backwards to America to do as the US pleases!
Published by MAHAGURU58 at 9:31 AM