Mislabelling the Muslims. A strategy to cultivate blind hatred! 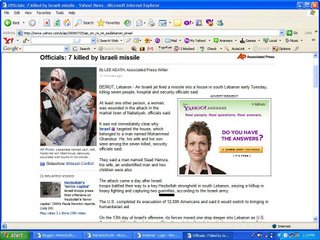 Does anyone realise the covert 'mislabelling' and 'branding' taking place in the news media when addressing the Muslims who are being attacked by the Zionists Israelis and their patrons , the USA over the last 5 decades or so?

I have underlined the word 'guerilla' in the screenshot of today's Yahoo News about 7 more innocent victims and casualties of the Zionist butchering 'bastards'!

I am very upfront with MY labelling of the rogue regime creating havoc right now over there in Lebanon because the Muslim nations are so bloody weak under a proven to be useless Chairman of the OIC, a sure 'gone case scenario'!

The world's media so conveniently labels the citizens of those Muslim countries fighting to get rid of their nation's invaders and occupiers as 'guerillas, militants, rebel forces, terrorists, fundamentalists, and all other negative sounding propaganda terminology with a well planned and well executed chain of actions through all forms of broadcast medium.

Even, here in Malaysia , we see and hear of these 'mislabelling terminology' being used by our nation's television, radio and newspapers as a result of the enemies of Islam deviously planting the seeds of rebranding the Ummah as those who are against the 'Freedom' and so called 'democracy' being touted by those Kaffirs out to destroy Islam and the Muslims in the real sense of the word!

Just take a minute and picture this scenario. Let's say that the USA or any other nation out there comes to invade Malaysia!

You and me will be labelled as 'insurgents, guerillas, terrorists, fundamentalists, rebels', this and that by the media.

Slowly but surely, the very civilian populations of whatever country opposing the takeover and assault upon their lifes, their homes, their families, their countries will be branded as the ones who are wrong!

Just look at any news report, article, broadcast out there today and realise the clandestine efforts to paint the victims wrong and the aggressors as right!

You've got to hand it to those media 'bastards' for pulling a fast one on the world's population!

This is part and parcel of a larger grandiose plan by the world's # 1 terrorist nation, the United States of America and it's illegitimate offspring whom they love and care for so well, that if the Zionist Israelis were to even cough a little, Big Daddy Bush Wacko Jr would be on the next plane with the cough syrup in hand to protect and take care of America's surrogate child, the Palestinian lands usurper and massacrer of innocent Muslims lifes , the Goddamned terrorists regime of the Yahuds, Israel!

I hope that the Muslim Media Network wakes up and labels them back the same! As for the 'ball less OIC' don't even bother to waste a breath, thinking about them!

They are the shameless gathering of useless b'leaders of the Ummah who ought to be blasted to Hell! From the looks of it, it will come true, very soon for they do not have even the balls to protect their people , what more their nations!

America! Do as you please! The OIC will just stand there looking stupid as you massacre their member nations and will just 'see'!

They won't move a muscle or even twitch a nerve and will be so accommodating as you lubricate them and do as you please!

George Wacko Bush Jr must be grinning from ear to ear as he watches Israel screw the OIC!

Damn!!! All the mislabelling and 'rebranding ' is finally paying off.

No one's resisting from the OIC! Mr. Jelly Belly sure sticks to his buns ...err was that supposed to read as 'guns'? Nahh..that's the right word..buns! :P