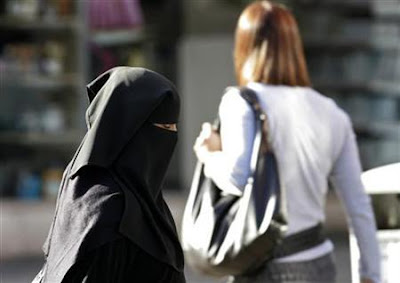 Assalamualaikum to all Muslims reading this and May Peace and the Guidance of Allah be upon the rest.

You might have heard of the film 'Enter the Dragon' ; this and that before.

Well, now brace yourself for the 'Enter the Ninjabis!'

British Muslimah's have now taken up self defense classes after their safety and wellbeing when being in public and face the harassments of those Islamophobes!

Reuters has published a report on this phenomenon after Muslim women face a growing danger from attacks by those who targeted Hijabis and Scarf wearing womenfolk just because they were Muslims.

In a sense, this taking up self defense classes is good for the ladies as they can protect themselves from the riff raff of society who prey upon them.

In our own country here in Malaysia, the rising number of vicious sex related crimes against our womenfolk has been worrying us and the ineffective justice system has not nipped the problem in the bud so to speak!

If only the murder and rape victims like the late Canny Ong, Nur Suzaily Mokhtar and others had been able to retaliate and smash up the bastards who had violated and murdered them as a result of their being helpless, they would still be alive today!

I am all for the empowerment of our womenfolk, no matter whether they are Muslims, Christians, Buddhists, Taoists, Hindus, etcetera!

The women of this world need to learn self defense as part of the necessary curriculum of the worldwide education systems and each and every person, male or female be taught the basic martial arts to protect themselves from harm.

The current justice system does nothing to stem the growing number of crimes against women and we need to punish the bastards who are harming the people with nothing less than the capital punishments for rapes and molestations!

Same goes for incest cases. It is nothing short of being lower than the animals to commit such inhumane crimes against one's own flesh and blood! Thus the need for the Hudud Laws to be implemented upon all the filthy scum who are committing such heinous crimes against the women of this world.

The problem is there will always be those who would oppose the Hudud under the banner of human rights, this and that bullshit!

What about the rights of the poor victims like the late Canny Ong, Nur Suzaily Mokhtar and the hundreds and thousands of others, now dead and forgotten by the system?

I welcome this move by the British Muslimah's to take up self defense and kick the asses of any bastards who dare to disturb them. If I had my way, I'd love to see the rapists and molesters be burned at the stake just like they did in the earlier centuries.

The time has come for us to be cruel to the vermin in order to be kind to the innocent victims of today as the so called 'civilized' world has obviously failed to stem the tide of vicious crimes against the people of the world.

It's time, the ladies here in Malaysia do the same as what the 'Ninjabis' of Britain have started.

So, dear Ninjabis of England, go kick ass! May the force be with you! Ameen!
Published by MAHAGURU58 at 3:08 PM