Uptrenders are owed an apology! 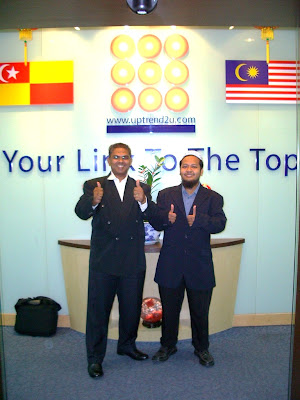 The recent fiasco regarding the blanket 'fatwa' spewed forth by the self claimed 'ulamak's of this nation about the internet based fly by night schemes had in a way affected the income and businesses of Uptrenders like myself.

Even though Uptrend Network Sdn Bhd had nothing to do with all those 'get rich quick' scams and schemes, the blanket ruling by those who think that they are spotlessly clean and absolutely sinfree, caused many potential prospects to shy away from joining our networks!

Talk about causing so many fellow Malaysians unnecessary hardships because of their shortsightedness and gross failure to take the tremendous impact of their stating that the internet based schemes are haram and not clarifying the guilty ones and those that are legitimate?

It's like saying that because certain individuals masquerading as 'alim's screwed up and committed zina, corruption and criminal breach of trust's as we see every now and then in the newspapers and mass media, every 'ulamak' is a bloody rotten scoundrel!

Now, how would these chaps feel if I go around saying so? Pissed off? Angry like hell?

Well, I sure hope that these irresponsible ones will get to taste a tit for tat situation soon in their life's!

I have met many fellow Uptrenders who complain that their business too had been seriously affected just as I suffered last month.

Do the fatwa spewers feel any sympathy or remorse towards those of us who got hurt by their blanket rulings? Do they have any conscience left in their smug egoistic selfs?

No sirree! It's not in them to say 'sorry'! I hope that they get to taste the extreme hardships that many of us felt last month! May they get boils on their butts! Idiots!

These are the kind who do not bother about others and imagine that they are the saviors of the Ummah!

The reality is that the Ummah here are rotting away in various other major sins which somehow does not get their attention as much as the business aspects of the internet schemes did!

Why is it that these same fellows close one eye and do not raise any tantrums against the fast spreading sinful activities in the nation with the same gusto that they showed in the internet based schemes issue?

That's why I am so pissed off! Anyway, Uptrenders have now been proved to have nothing to do with those schemes and thus we are on the way up again.

I just hope that the spoilsports and killjoys shut the hell up and mind their own business next time!

Go do your preaching at the sinspots right before you and take them to task if you have the balls to do it!

Like As Syahid Hassan al Bana did! Then, you'd be doing the right things as an 'ulamak' in the truest sense of it! As far as I am concerned, Allah Subhanahu Wa Ta'ala knows us best!

He it is who knows what's truly in the hearts of mankind! There are just too many holier than thou's running about in our midst at the moment throwing sand into other's rice bowl under pretext of being the saviors of the Ummah! Utter poppycock!
Published by MAHAGURU58 at 4:08 PM