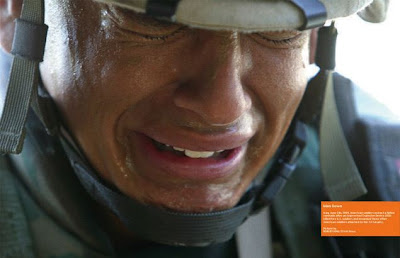 I can just keep on adding pictures and giving you excerpts of the terrible toll that the Bush Jr. administration in Washington, US of A have inflicted and are still inflicting upon the life's of six hundred thousand over now dead and disfigured Iraqis as a result of the greed for oil and money , the American President and his VP have in their hearts.

As they say, pictures are more effective in conveying to the world, what Bush Jr has committed in what may be the world's worst cases of war crimes committed by a President who is deaf, dumb and blind to reason.

You judge it for yourselves. 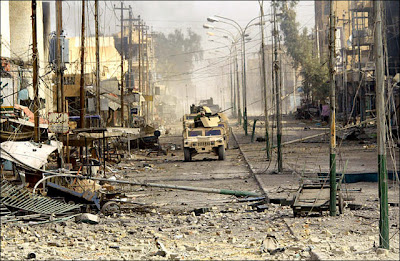 The 'progress' that America has brought to the ancient lands of Iraq. Saddam Hussein was bad, eh?
So, this is good for Iraq today? 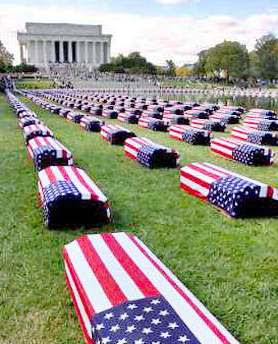 Have you no conscience?

Ahh..I forgot! The wacko doesn't even have a soul!

So, parents of those mangled, shattered bodies in the Stars and Stripes draped caskets, who do you figure is responsible for causing your sons and daughters to die ?

No prizes for guessing...but I figure the culprit is the very one you reinstalled as your leader. 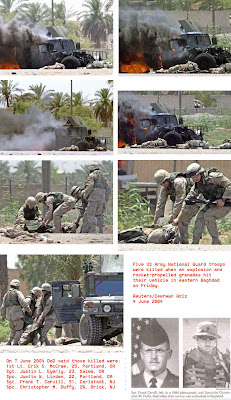 This is what you get when you go invade a land where its people are known to not take things lying down! 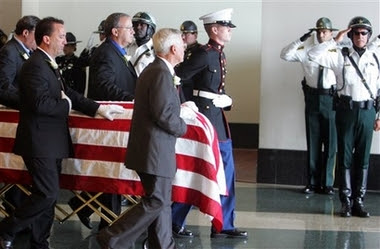 For all the hype that the world's greatest terrorizing nation can beguile its citizens, reality comes home draped in a national flag.

The one responsible for this tragedy is guarded by Secret Service agents, trained to die for the despot who has the blood of so many people on his hands.

What an example of true liberty at practice! 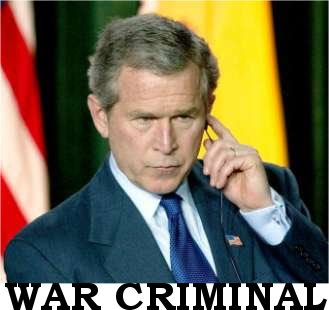 The face of a tyrant, who is perhaps the world's supreme war criminal of all times. Funny thing is that there are still 50 over percent of his nation's voters who still believe in the idiot's bullshit!

Now, what does that tell us about their IQ level?

Your guess is as good as mine. Not that bright, huh?

Well, they deserve the simian. Excuses. A dime a dozen. Guess, Capitol Hill is the home of the dumb and dumber, after all.

Hollywood sure must have gotten their ideas from the nitwits in office there. 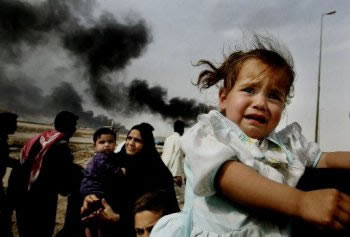 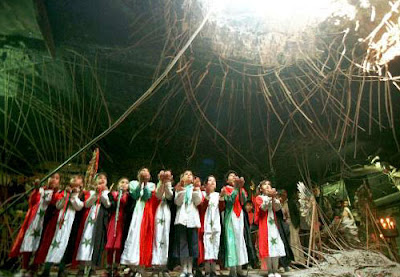 Innocent life's traumatized for no other reason than an occupier's greed and indifference to sufferings of the civilians. 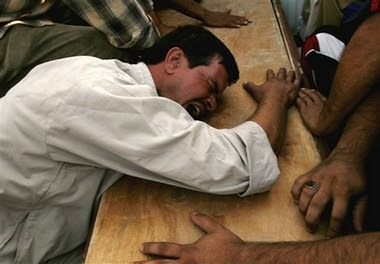 No amount of crying is going to return the life's of those caught in the crossfire of Bush Jr's war on civility. 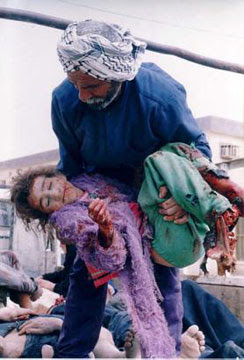 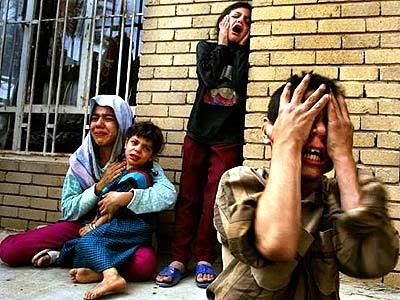 What have you accomplished George Bush Jr. except to destroy and crush the Iraqi people's life's? Should you even guess why the world hates you?

Do you ever wonder why your soldiers are now killing themselves over there in Iraq?

How do you and Cheney even sleep when because of both of you, so many life's are being shot out, bombed to bits and a country reduced to rubble?

It's bound to happen! As the stress and frustrations get to them due to the resilient spirit of the Iraqi freedom fighters in not giving up in chasing out the American invaders now occupying their lands, we read how the American soldiers are committing suicide in higher numbers there than anywhere else the modern day colonialists have taken over sovereign countries and nations under guise of liberating them.

Read Yahoo News here to see for yourselves how desperate soldiers caught in the quagmire of the war in Iraq are killing themselves out of sheer frustrations. Gone stir crazy!

This is the result of the actions and decisions of their most stupid, heartless president in the tradition of the warmongering Bush family, who have caused more than half a million Iraqi civilians to perish in their clandestine agenda of securing Iraqi oilfields under the pretext of removing Saddam Hussein from power.

This was under false charges of having weapons of mass destruction, which have been proven to be not true and a fabrication by both Bush and Blair.

I say this to the American people. You deserve such a situation for returning the idiot to power and to still be as the ostrich with its head in the sand and butt up in the air, oblivious to the truth of what vicious crimes have been committed by your beloved dumb ass idiot you have over there in Capitol Hill, desecrating the very vestiges of common decency of the office of the President of the United States of America.

America and its citizens used to be respected back then because of the good deeds that your forefathers did but after World War 2, all that good work disappeared into oblivion as greed and treachery took root and sprouted all over your once respected government.

For all the good that America did before, it is sadly today, despised all over the planet and you all live in self induced and imagined fear of all other nations whom you call aliens!

What a bloody shame that despite all the advancements in the field of science and technology, including this internet, Americans today are reduced to living in paranoia and illusions of grandeur when in reality, you live in fear and rising crime brought about by a couldn't care less President you have there in the White House.

I think its high time Americans come to their senses and stop sending your sons and daughters to their doom over in Iraq and all other nations which your President and his VP Dick Cheney covet to be their next cash cow at the expense of the lives of millions of innocent people that they are so willing to snuff out in their vicious plans to enrich their own coffers.

This planet belongs to all other Children of Adam Alaihis Salam. Learn to be good neighbors instead of being stooges of your despots in Capitol Hill. Too much blood has been shed by American bombs and bullets.

Yet, the USA imagines itself to be the saviors of this world? Well, tell it to the men and women returning home in the caskets , shattered, broken and lifeless draped in your Stars and Stripes as well as the half a million over graves in the ancient lands of Iraq!

Do you think anyone over the world would even shed a tear for the murdering hordes you have sent over to the holy lands where Prophets of God, once tread?

Think of what you have done?

Do you want to see our country go to waste as what has happened in Iraq?

I recall reading one particular idiot who asked George Bush Jr. to invade us and bomb Putrajaya!

Man, if the likes of you are ever in our sights, we'll kick your ass to kingdom come, you ingrate!

Wise up people and take care of our nation by first and foremost exercising control over that bloody tongue or screwed up mindset!

May Allah SWT protect us from the nitwits we have here amongst the population of this nation.