Back from my Aidil Adha Trip to Kuantan

Assalamualaikum ya Mukminuns and May Peace be upon all my fellow Children of Adam Alaihis Salam.

Alhamdulillah! We made it safely back to our residence here in KL late this evening from Kuantan after being there for 4 days starting from Thursday, 19th of December 2007 for the Eidul Adha celebrations at my wife's kampong.

It's been a satisfying trip back to the East Coast after not being able to return home to Kuantan for my relative's funeral a couple of weeks back due to the East Coast Highway being cut off by the recent floods. Some areas in the States of Pahang, Terengganu and Kelantan are still flooded according to the news reports.

It was raining on Eidul Adha and the general atmosphere was a bit gloomy in the morning. The skies cleared up at midday and the slaughtering of 3 cows took place at my relatives kampong without a hitch.

I remember a previous Eidul Adha where one of the cows simply died before it could be slaughtered. It was one of the most aggressive bulls amongst the 5 heads of cattle that my family members had purchased. The stress must have been too much for the beast! Heart attack, I suppose.

Well, this time around, everything went smooth like clockwork although there were a few anxious moments when the last bull did a 'rodeo style bucking' on all fours into the air and was very aggressive towards its handlers.

It was overpowered by the kampong cowboys who lassoed the beast down and expertly brought the protesting beast to its knees so to speak.

My brother in law, Hj.Zainal swiftly and efficiently slaughtered the sacrificial animal and I have it all on video.

The file is a bit large and maybe after some splicing into several parts, I might be able to post it online either on You Tube or here using Blogger's own video hosting service for your viewing pleasure.

After the 'Qurban' activities ended, we retired for the day but got to enjoy a sumptuous 'Sup Tulang' with close relatives and invited special guests.

Lots of stories and latest updates were exchanged during the feast. Pretty interesting what good food and company can do to one's catching up on the latest happenings in the family circle and close networks.

Among the highlights of our trip was meeting my wife's grand nephew, Amir Rafiq. This little boy genius is simply one of a kind.

He's just a 'gadget freak'! He can handle all kinds of latest technological gizmos and is a pro at handling the computer! Guess his age?

Sometimes it just amazes me to see, hear and marvel at this genius of a child who simply can't stay quiet for one second. He's always fiddling with this, tinkering with that.

He handles the latest Nokia handsets like a pro and can just work out the various controls and commands at ease like the seasoned expert that he is!

Talk about child prodigy's. This boy is an excellent candidate. When it comes to my phone, he's a bit upset because 'Atok Uncle's phone is the old school type.

Your basic Nokia mobile phone with no color screen, in built camera's or exciting games.

Hehehehehe...he surely must be thinking to himself what an ancient relic his 'Atok Uncle' is using such a basic phone?

The basic one will do for now, so give 'Atok Uncle' a break aa Amir? Coming Soon..Next Change!

I was just amazed to see him before my relative's computer in the office room, busily typing away and playing a computer game like an old hand.

I immediately rushed upstairs to get my digital camera and record the amazing sight of this 3 year old handling the computer so expertly. He was playing one of those 'sock it to him' videogames on the pc and by the time I returned with my digicam, he was playing something else!

I won't be surprised if Amir turns out to be like one of those IT experts in India or the USA and come up with his own software or other inventions.

His parents were about to leave for their home in Kemaman and his dad, Rafee called out to him to shut down the pc as they were ready to leave.

He then moved the mouse's cursor and started to shutdown all the opened windows one by one and at last shut down the pc as any one of us would.

All that is on another larger video file. I need to split the video into several parts smaller than 100MB in order to upload it to either You Tube or Blogger.

This one here is of him listening to some audio files. Hehehehehe...bijak ...bijak! 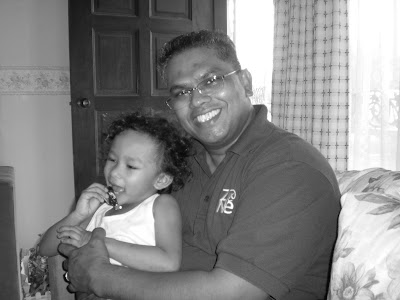 Subhanallah! May Allah SWT bless him with His Taufik and Hidayah and bestow upon him and his parents the best of this world and in the hereafter! Amin! 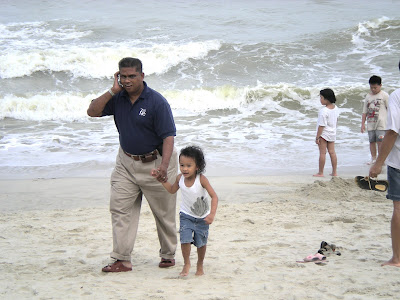 Here's me holding tight to the fella as he starts to go do something else that interests him at Telok Chempedak Beach, Kuantan when I brought him and the others to an impromptu outing day before yesterday.

He was practically running all over the place and enjoyed himself very much! When I helped him make a hill out of the sand, he said 'volcano' and 'hot lava'!

Will share more later. More updates on other things after this.
Published by MAHAGURU58 at 1:06 AM