I haven't been online since leaving for Kuantan on the 19th of December, 2007 for the Aidil Adha festivities.

I had a forced hiatus from the internet and haven't had the chance to check my You Tube account or my emails from then till yesterday.

When I checked my You Tube account today, this warning from a Hindraf You Tuber stares me in the face. 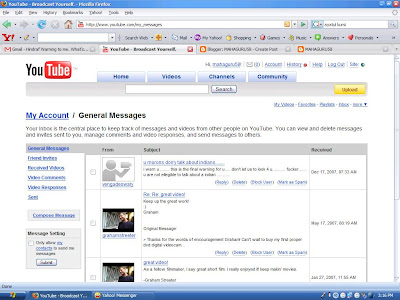 This is the kind of folks we have to face in our struggle to establish a fair and free platform for freedom of expression and defense of what we have as individual concerned citizens of Malaysia.

A death threat from an anonymous Hindraf supporter. His or her ID is vengadeswary. 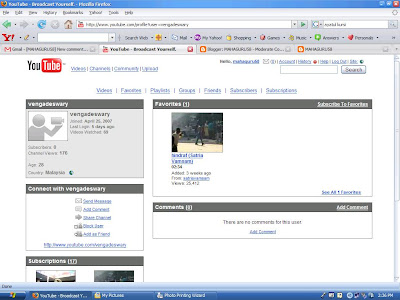 I am not one who scares of Death. I have been telling others about the imminent end for all of us including this threatener from Hindraf.

To me, I believe in Allah Subhanahu Wa Ta'ala's Taqdeer.

If I am destined to die for the sake of defending Islam and my fellow Muslims, Alhamdulillah.

Would I cease from writing the truth and expose the wrongdoers in our nation and elsewhere?

I have written to my lawyers and await their instructions. 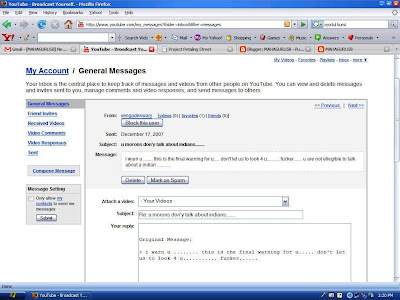 As for the nation, I state herewith that I write with the intentions to enjoin the good @ Al-Makruf and forbid or combat the evil @ Al-Mungkar.

I leave it to Allah to do what He wills!

Mahaguru58 is a Muslim Blogger who never shies away from upholding Al-Haqq and expose the Batil.

Malaysiakini's latest reports about using the term 'Allah' for the Christian's magazine was my earlier response.

I know that some folks won't be pleased to read about a true Muslim's stand about such an abuse of the term 'Allah' to be used for their deity or deities and my explanations as to the reasons for such prohibition by the Malaysian Internal Security Ministry?

The thing is have Malaysians grown mature enough to discuss and dialog decently between us after 50 years of Independence or are we still reduced to making death threats and force ourselves to resort to the law of the jungle?

To me, this death threat from Hindraf only reinforces my stand that democracy and freedom of speech or voicing out opinions is lost on those who choose violence as their tools of their trade.

Is there still hope for a peaceful Malaysia?

Looks like we are in for another spell of demonstrations and protests in the name of justice when it is denied to citizen bloggers like me.

I await what the Hindraf leaders have to say about this warning from one of their own?
Published by MAHAGURU58 at 3:39 PM