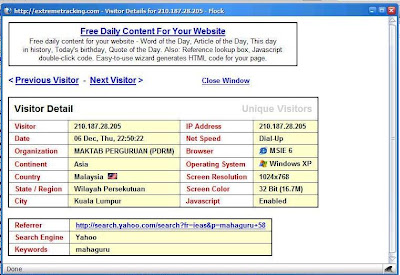 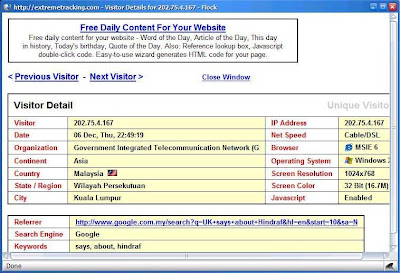 It's heartening for me as a citizen blogger to know that our Malaysian Government and Royal Malaysian Police have become some of my most avid readers.

At least I don't have to go carrying a banner and stand in front of the Prime Minister's Office Complex in Putrajaya to share with those who rule over us and state my causes.

I am glad that our Government of Malaysia and the Royal Malaysian Police are monitoring what citizen bloggers like me and thousands of others in the Malaysian Blogosphere are writing about?

Internet has become a very effective way of communication and concerned citizens like me who are blogging here about anything that is relevant and needs to be shared with my fellow Malaysians and my rulers find it to be the best communication platform to exchange views.

If only the authorities have it in them to start an official blog that can cater to all our grassroots grouses and act promptly by corrective measures and actions, it will save lots of people unnecessary stress and also be a major cost saving measure to the Malaysian Government and the security agencies.

What am I implying?

Hehehehehe...well the FRU can save a lot of money by not having to go blast their water cannons and tear gas at marauding protesters in the streets....IF our protests or dissatisfactions are waged out here in the cyberspace!

We can have live chats or debates with the Malaysian Government Cabinet!

Now, that would be asking for the impossible but still hey !...remember that anything's possible nowadays?

Remember that it was Mahaguru58 who came out with this idea!

So, how about it dear Malaysian Government internet observers?

Will this dream of mine be realized?

As they say, 'Where there's a will, there'll definitely be a way!"

After all, we do claim to be amongst this region's leaders in utilizing the Multimedia Super Corridor!

A different minister for each chat session. Registered users only. Decent, straight to the matter debate or discussion.

We can get the communication firewall between the government and the people abolished in this way and the government get the real story straight up from the citizens without any hanky panky from the intermediaries who have been having their way all these years!

Malaysiakini could be the forerunners on this if they want to?

How about it Steven? Can this be done?

After all you guys are amongst the pioneers in citizen web journalism.

I hope that the Government cyberspace monitors and in the PDRM can raise this suggestion with your bosses in your next meeting.

In the meantime, Thank you for reading Mahaguru58. Good to have you gentlemen here!
Published by MAHAGURU58 at 12:43 PM