PM Abdullah Badawi -'The honeymoon is over!' 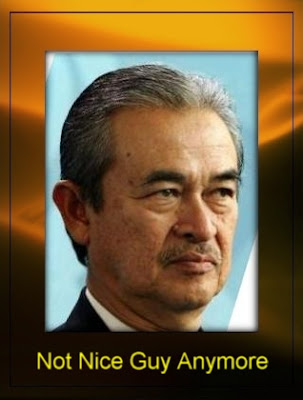 Hehehehehehe...well, wake up folks! The honeymoon is over!

Everyone was thinking that it's okay to demonstrate! Mr.Nice Guy won't mind!

Hell! He even allowed the justice system to free Anwar Ibrahim, who if Mahathir was still calling the shots, would be still counting the bars and looking at the sky through the cell window, if there was one?

C'mon people...let's be a bit realistic.

There's no way any government would simply let it's detractors have it their way all these while and we have been lambasting the fella day in, day out without fail!

I mean, the guy's just as human as any one of us!

Sooner or later, the sugar coated smile was sure going to wear out and show it's true colors!

Well now, it's coming out time!

Abdullah Badawi's honeymoon is over!

When push comes to shove, the big boy is sure going to kick ass!

I mean, who wouldn't?

Personally, he might not be as mean and firm as Mahathir was but eventually he has realized that if things are to be, it is up to him to lay down the law and thus all the latest protests after protests has sure riled up the fellow that he has finally come to his senses and has done what any BN Prime Minister would do?

We have yet to see this nation be run by an Opposition Prime Minister and from the looks of things, I don't think that I will see it in my lifetime.

Change does not take place overnight.

Malaysians who think that just because the Opposition, the Malaysian Bar Council, NGO's and pressure groups are starting to stir up the public into joining them in rallies and street protests which have yet to be given any permits, the situation in the coming GE is going to change, are just building castles in the sky!

The opposing public have yet to come to a stage where there is a possibility of affecting the outcome of the coming GE. In a democracy, the majority wins!

Dissatisfactions are only burning up and boiling in the hearts and minds of all those who are mentioned above. Is there any chance of seeing situations change for the nation overnight?

I don't think so.

As I was saying in my earlier posts, sure there are quite a number of citizens who aren't happy about a number of things but then again, has street protests solved anything so far?

Some might argue and say yes. The Elections Commission has done a few changes according to what BERSIH has called for like the changing of the ballot boxes to be made of transparent materials, the promise of using indelible ink to avoid election fraud, etc.

Yet, we all know that there are certain elements of our populace who have breached the law by organizing rallies such as HINDRAF's which has seen violent skirmishes take place between Hindus and the Malaysian Police Force.

What is going to stop some other groups from coming out with their own action forces?

Are we going to see Muslim Rights Action Force?

Ahh.. how about a Bloggers Rights Action Force, eh?

Every Ahmad, Ah Seng, Samy, Singh and native is going to start forming their own action force and take to the streets of this nation,creating an atmosphere of fear, chaos and anarchy!

Is that what we want?

What the hell for are we so bloody impatient that every other day we need to go and protest this and that?

Are the protest organizers ready to mass forces that can take over the bloody nation?

What is the point of staging a protest when we bloody well know that such a protest is going to be deemed illegal and the police are going to receive orders to arrest the protests leaders as they have done?

What do we gain from these?

Is that what we are looking for?

Are we so bloody hung up on getting foreign nations such as the USA and the UK or any other bloody country to condemn our nation?

Who the hell is so perfect out there?

Is the US perfect?

Hell! Open your eyes wide and see the atrocities that takes place there where American Blacks are still victimized practically every other day and there are more American Blacks in prison there than their White Americans!

Just having an Afro American running for President is not changing anything where racial discrimination still thrives in current day America!

Discrimination is well and alive in all other countries no matter what excuses anyone can up with?

We aren't that bad here today.

All Malaysians are free to go and vote for the Opposition come Election day!

Things aren't as they were all those years ago.

Today, we have come to a stage where Malaysians are starting to have it in themselves to go out and protest for whatever cause they believe in.

Instead of wasting their time and energy on the streets, I figure that all those who oppose the BN's irongrip on the seats of power here in Malaysia would do better by starting to prepare for the General Elections.

Educate the masses about their rights, the right way!

Street protests aren't going to kick out Abdullah Badawi! Only way that you can see change is through the GE!

Just read Malaysiakini and see the dissatisfactions against the BN being voiced out by the growing number of disgruntled folks. Malaysians are getting vocal by the day but they can't make the BN go away just like that, can they?

In case Malaysians have forgotten, it was they themselves who gave the fella a landslide victory at the polls!

So, who's to blame for having Abdullah Badawi there today?

The very same Malaysian voters who if I am not mistaken are going to return the fella for another five years of the same if not worse?

Nazri , despite his diarrhea of the lips ridiculous statements all these while has said something reasonable at last when he asks the Malaysian Bar Council members to form a political party, register it properly and go stand for elections , fair and square against the BN which they hate very much if they are really serious about going against the current government?

As far as HINDRAF is concerned, those chaps have just screwed themselves by making all those caustic statements and further alienated themselves from the Malaysian public by creating an uneasy feeling for everyone who cherishes the peace and harmony that we have enjoyed all these while.

Who likes to see our fellow Malaysians killing each other on the streets of our nation because some smart ass political kingpin has incited them to go bash each other up for their own selfish personal agendas?

Change does not come in an instant. It has to be initiated over a period of time and the ones intending to create that change ought to be realistic in going about getting their objectives achieved!

As for the moment, the honeymoon of Mr.'Nice Guy' is over.
Published by MAHAGURU58 at 5:34 PM