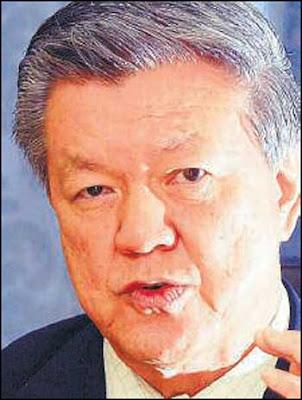 It's one thing for the Malaysian Health Minister Chua Soi Lek (above) to admit his being the one caught in action of committing adultery by way of the sex DVD being circulated in JB and other areas but another recalcitrant example of a BN Minister being shameless in remaining as one!

Resigning from his post immediately is however not in the integrity of the canvas faced BN Ministers of the incumbent Government of Malaysia!

No matter what proofs have been furnished and even when the culprit has had the balls to admit his lecherous misdeeds , you can bet that the bloody minister will not face the sack as the PM will not have it in him to remove the 'hound dog'!

Justice and integrity are a rarity in the BN run Government of Malaysia and I am looking forward to what cock and bull story the Imam Hadhari is going to come up with to exonerate his lecherous Health Minister even when the adulterer has confessed?

You can line up their criminal acts before the courts. You can distribute as many videos or Dvd's of their mountains of sins or corrupt cases before the judiciary.

All won't stick as they are 'teflon coated'. VK Lingam video is a classic example. The culprits aren't losing sleep over the expose! Hell, they love the attention to strut their stuff before all!

No matter what proof one comes up with, such evidences have a strange way of not making impact!

It is as if that anyone from the BN Government who is caught doing wrong will somehow come out smelling like roses and sprouting angelic wings and a bloody halo over their heads.

The BN Ministers are like the Godfathers of the classic Mafia movies of Hollywood!

They are the 'Untouchables'. You can try your best to bring them to justice but it will be 'just tease'!!!

Chances are that none will stick to the butts or the canvas faces of the BN Ministers!

Waterproof first class! No wonder many will go all out to maintain and retain their ministerships to the death and hope to die in office, glued for life to their seats of power!

Prime examples are the Works Ministry, International Trade, Energy & Communications, and other dinosaurs from the Mahathir era!

Even when Malaysiakini headlines the scandal, you can rest assured that Chua Soi Lek, the MCA Vice President featured as the main adulterer in the sex DVD, will not be bothered to tender in his resignation letter to the PM or be asked to do so by Abdullah Badawi.

Let's see what the BN top leaders are going to say and try to whitewash the fellow?
Published by MAHAGURU58 at 12:44 AM