When I look at the way the hordes of UMNO Penang's paid stooges gather in protest at KOMTAR, Penang brandishing banners that have clearly been prepared in advance, I can sense that today's protest is not something that has taken place at the spur of the moment?

The types of characters that we can see in the photos are the kind who are obviously not that bright and riff raff who love nothing but to cause trouble on the streets of Penang, knowing fully well that they will not be stopped by the FRU? 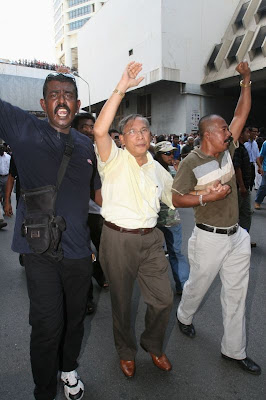 Watch the way the UMNO Mamak brute shown here pushes aside the videographer of the videoclip above as he marches along besides the UMNO leader through the illegal protest yesterday at 01:08 of the video above!

Would this idiot know anything about the NEP if he was even asked about it?

You can bet that he would be clueless as to the whole thing and only serves his purpose of being a hired muscle by the UMNO Penang leadership with the full blessing of the double standard practicing FRU units of Penang!

Well, have you heard of any of the protesters getting even a slight scrape on their bodies as a result of being chased or assaulted by the FRU?

The FRU just stood by and allowed the UMNO protest to take place without any action from them for more than an hour and only later used their loudhailers to ask the crowd to disperse?

What an obvious show of double standards put to practice by the FRU? @#$%^&#!

I just don't know what kind of a sorry ass bunch of losers are there in Penang's UMNO?

All these while during Koh Tsu Koon's rule, you guys were complaining about being sidelined by Gerakan but you guys never took to the streets in protest as what you did today?

Now that the Malaysian people have kicked out the BN, you guys are so quick to run riot on the streets claiming that Lim Guan Eng is marginalizing the Malays?

Are the Malays so useless that you have to lose any sense of self reliance and enterprise that you all need to be spoonfed till the day you kick the bucket?

Bloody embarrassing if you ask me!

The Indonesians at Chow Kit are much more enterprising than the whole bunch of you louts who gathered around KOMTAR this afternoon!

Compared to them, you guys are hopeless!!!

I also hear of UMNO Penang leaders asking the Federal Government under Abdullah Badawi to pull out mega projects from Penang just because the DAP-PKR-PAS Coalition have been voted into power by the Penangites?

Classic case of unprofessional, immature bunch of pathetic losers who would be willing to sabotage the state of Penang just because you can't suck and freeload anymore at the expense of the Penang taxpayers?

Don't you guys have any shame?

Why the hell are those of you sore losers in UMNO calling for the BN Federal Government to start stopping projects in Penang just because the BN got whupped in the 12th GE?

Bloody stupid idiots who want to destroy my home state just because you can no longer engorge yourselves on big fat crony linked government contracts as you have enjoyed all these 50 years at the expense of the rest of the Malaysian public?

I am just too pissed off to continue!