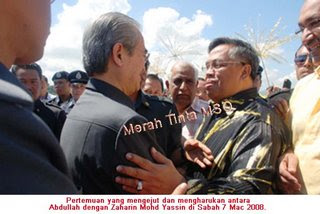 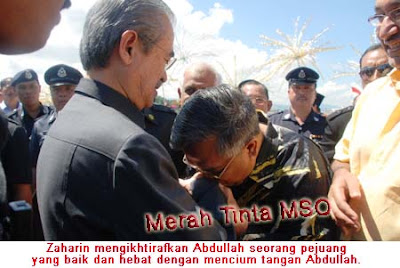 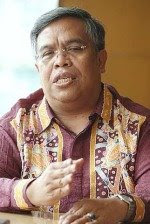 I am sure that many of us were sort of surprised to hear of my fellow Blogger Sang Kelembai @ Zaharin Mohd Yasin's about turn in capitulating to the one whom he had sworn to take to task for being (in Sang Kelembai's own words:
"ber-Perdana Menteri seorang yang kaki tidur, yang mementingkan perniagaan anak dan menantu, yang meneruskan rasuah yang berleluasa dan seorang pemimpin yang suka meraba.") which means ' a Prime Minister who is prone to sleep, (practices nepotism in) favoring the businesses of his son and son in law, who allows ongoing corruption and who likes to grope (ladies)"

I just called Zaharin and asked him as to why he has capitulated so abruptly after all that he has lambasted Abdullah Badawi day in day out after getting expelled from UMNO?

Zaharin asked me 'Mahaguru! Is it wrong for me (Zaharin) to embrace a fellow Muslim and to make peace with one who has been whacked left and right by all?'

Well, what can I say but agree that surely there's no law stating that he can't do that but we are talking about years of open cyber warfare here launched by Zaharin against the person whom he has just embraced, apologized profusely to and kissed the very hands that had groped Michelle Yeoh and other fairskinned ladies that were within the Imam Hadhari's reach?

How do we accept such an unforeseen 180 degrees about turn by one of Abdullah Badawi's most embittered critic's?

Mind boggling, one might say but to me I see Sang Kelembai as just another diehard UMNO member who despite all his scathing attacks against Pak Lalalalala just returns to his roots to being a hardcore UMNO Malay nationalist politician!

Yes, he is a dedicated UMNO member, never mind that the party which he loves so much chose to sack him from its membership roll for daring to speak ill of their embattled President?

The problem in UMNO is that they are run like a bloody dictatorship!

It was said that UMNO stood for 'Under Mahathir No Opposition'.

The reality is that even after Mahathir, there is still no room for any free speech or dissent?

Remember the fiasco of the Cawangan Parit Bt.8, Sekinchan UMNO Youth Leader, Saznizam Adham, who got dragged out by his neck in the MYKMU UMNO Forum held at Hotel Singgahsana just for asking why UMNO can't accept Anwar Ibrahim back into it's fold?

Here, watch it for yourself.

When I asked Zaharin to go look at what Kickdefella and Mohd Sayuti Omar have written about his 'kiss and make up' with his beloved Pak Lah, Zaharin replied that he was the one who brought along Mohd Sayuti Omar to greet Pak Lah at the Kota Kinabalu Airport!

Gets pretty ridiculous as we dig deeper, doesn't it?

I mean what will they think of next in the world of our topsy turvy Malaysian chickenshit politics?

You can go screw up somebody upside down as you please all these while and in the next second go chummy chummy and apologize for having ribbed and castigated the person like hell?

Fuyoo! The world needs to come learn from these UMNO politicians as to how to diss your opponent day in day out and in the next split bloody second, go embrace the bugger and kiss his bloody hands!

Political principles fly out the window by the second here in Bolehland!

Zaharin is one of my blogger friends and it pains me to have to write this but hello?

This is exactly what socio-political-religious bloggers like myself have to contend with and just write the bloody truth for what it is?

I ribbed him about the news that he has been bought for a million ringgits and he replied that hell yeah, he would love to have a million ringgits if it was offered to him before the GE to shut the hell up and kiss kiss Abdullah Hj Ahmad but denies that piece of news as a lie!

He asked me to go read what is reported at the Star online and repeated that he'd kiss old Pak Lalalalala's hand even if he was offered just ten bucks!

Hehehehe! From a million to just ten small ones! What a let down? So cheap aa???

Kickdefella and MSO have both written about Sang Kelembai's kiss and make up with the 'Kerajaan Tiga Beranak' leader.

I think this fiasco will be forever remembered as the day when the Malaysian Blogosphere got screwed by one of it's own?

At the end of the day, Sang Kelembai said to me that if we are to be so critical of his change of heart towards Abdullah Hj Ahmad, what have we to say about the late Yasser Arafat who kissed and made up with Israeli Presidents before?

I could have come up with my appropriate replies but decided not to because I still regard Zaharin as one of my blogger buddies.

I just don't have the heart to hurt him! Friends don't do that!

So in the spirit of camaraderie, I just told him that no matter what I still consider him as my friend and will just write this article to glamorize the bugger! Hehehehehehe!

Zaharin said that he's just waiting to see what Bloggers are gonna paste him with before writing his reposte?

Well, as they say in Malaysian politics, anything goes!

I'm just beyond being surprised by anything anymore!

It's a bloody circus out there!

The Be End Circus to be exact featuring UMNO as its main act! :D Hahahahaha!
Published by MAHAGURU58 at 6:23 PM