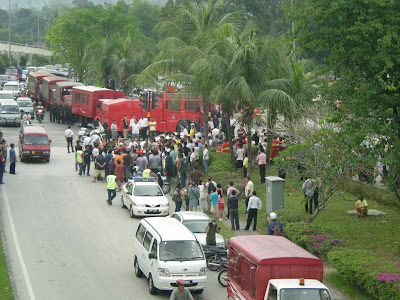 Dear readers,
Following the brutal turn of events where ordinary citizens of Bandar Mahkota Cheras, Selangor have been teargassed by the FRU and Police, I think that it is important for the citizens of Malaysia to learn about who are behind Grand Saga Sdn Bhd? 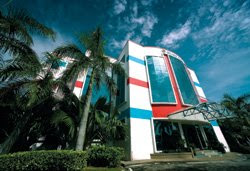 The Board of Directors of Grand Saga Sdn Bhd are:
I would like to share with you a Harian Metro report which exposes the arrogant manner by which the former Works Minister, the incorrigible and most hated Samy Vellu spoke :

So spoke the main culprit who burdened our lives with increasing toll charges over the decades where he almost always never accepted any part of the blame for making our lives miserable and had always sounded so bloody arrogant that his defeat in the recent polls saw many Malaysians celebrate like it was 'Selamat Hari Raya, Gong Xi Fa Cai, Happy Deepavali and Merry Christmas' all in one extraordinary day!!!

Now back to the topic.
It is absolutely an inconsiderate act and exposes the selfishness of the company to victimize the Bandar Mahkota Cheras residents who are just protecting the only access road to their residential area!

What does the company or the Malaysian Police Force expect the residents there to do but take proactive steps by protesting against the Grand Saga Sdn.Bhd Cheras-Kajang Highway Concessionaire's inhuman act of cutting off the access road to their township by erecting concrete barriers right smack across their main access road?

I did a Google search about Grand Saga Sdn.Bhd. and these are the following report that I feel is worth to be shared with you.

This is an article about Grand Saga sourced from theedgeasia.com

Grand Saga Sdn Bhd, the concessionaire for the Cheras-Kajang highway, is to negotiate with the government for compensation due to a soon-to-be completed access road, say sources.

The company is gauging the impact of the access road on its traffic flow and is preparing its case for presentation to the government.

The Cheras-Kajang Highway concession, like other toll concessions, includes a provision whereby the concessionaire is adequately compensated if an access road is built that connects to it.

This will allow commuters to enter and exit the township without having to pass through Grand Saga's toll plaza at the 11th mile of the highway.

The access road will also benefit residents in the nearby Sungai Long township developed by SHL Consolidated Bhd.

"The access road is scheduled for completion in a couple of months. After that, it will be handed over to the Kajang Municipal Council.

This effectively means that the issue of compensation would have to be dealt with between Grand Saga and the government, not with the Lion group," says a source.

It is likely the access road will not be opened until the outcome of the negotiations between Grand Saga and the government, a process which may take some time.

However, it is only a matter of time as the Mahkota Cheras and Sg Long townships, which cover more than 1,500 acres, now share only one entry/exit to the Cheras-Kajang highway.
Grand Saga's official did not respond to a request for comment.

When the access road is opened, it will have an impact on Grand Plaza's toll collection at the 11th mile, but not on the first toll located at the 9th mile of the highway, an analyst from Rating Agency Malaysia (RAM) says.

Revenue collection from the two toll plazas are currently about equal.

Grand Saga issued RM210 million in bonds to build the highway. Besides the bond issue, it received a RM59 million support-loan from the government.

But that wasn't all. The government had subsequently compensated Grand Saga for revising scheduled toll rate hikes.

Due to the revised toll rate structure, the government in 2002 extended the Cheras-Kajang highway concession by two years to Sept 18, 2027.

Then, in 2003-2004, the government paid RM104.93 million in compensation, apart from waiving interest and repayment on the support loan of RM59 million drawn down by Grand Saga in 1997 to finance the project, according to RAM.

Any further compensation may increase the government's total compensation for the highway to more than RM163.93 million, which would be highly ironic, considering the construction cost was only RM275 million.

The highway has been a profitable concern.

This was sharply lower than FY2003's revenue of RM68.56 million and net profit of RM27.61 million, as Grand Saga recognised a portion of the government's compensation in its income statement in FY2003.

Toll collections from the Cheras-Kajang highway have expanded over the last seven years.

There was an attempt by the above shareholders to inject Grand Saga into Malaysian Tobacco Co Bhd (now Measat Global Bhd) in 2000, but it did not materialise.

It is worth noting that the (former) BN Selangor government-listed infrastructure arm Kumpulan Perangsang Selangor Bhd had a 42% stake in Grand Saga in earlier years.

The report shows that even with the access road, the Grand Saga Sdn.Bhd. company has been making millions of ringgits from the tolls and even enjoys very generous compensations from the Federal Government since toll collecting operations in 1999.

The only thing I can conclude as a toll paying motorist ( I use the Cheras-Kajang highway regularly myself) is that this company is just plain greedy!

They do not give a shit about the people of Cheras. All they want is to make sure that they cut off access to the side road leading to the Bandar Mahkota Cheras township and force the residents to pay toll before entering or leaving their homes 24/7, till 2027!

That's what Malaysians get for returning the Barisan Nasional to power in the Federal Government!

Do Malaysians learn anything from this brutal act of Grand Saga and their patrons in the UMNO led BN Federal Government?

Nahhh...most Malaysians are still deaf, dumb and blind to all these atrocities!

That's what this 'grand atrocious Cheras-Kajang Highway vs the Bandar Mahkota Cheras' saga really is?

As for the FRU and the Police, what do you expect?

I hear that they are robots devoid of human compassion?

No matter that deep down in their hearts and minds, those policemen and FRU know that what is happening is wrong, those wage earners folks will just shoot teargas into the crowds of rightful citizens, maybe even baton charge the poor Bandar Mahkota Cheras residents and if push comes to shove, hello!!!things can just escalate out of control and innocent citizen lives will and can be lost?

We might even see some itchy fingers pulling the trigger with the excuse of 'self defense'!

Unarmed citizens against the fully protected and licensed to kill FRU police!!! 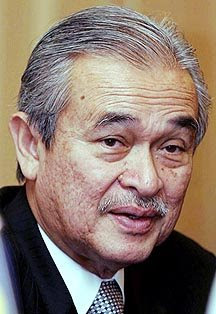 Do you think that the 'Cemerlang, Gemilang, Terbilang, Kaki Temberang' chap here will even give a shit about this matter?

Dreeeeeeeeeaaaaaaaaaammmmmmm On!!!
Published by MAHAGURU58 at 11:11 AM