Ezam's return to UMNO - Fast tracking his way to power?

Frankly speaking, any of us who have been following the political theatrics of those who are amongst the major players of the Malaysian political scene, would sure have done a double take upon hearing that Ezam Mohd Noor, ex Parti Keadilan Rakyat's National Youth Leader and one of Datuk Seri Anwar Ibrahim's former lieutenants, Chairman of GERAK, claimant of having boxes of evidence that implicates BN Cabinet Ministers, former ISA detainee and supposedly one of the major Opposition figures who pose a threat to the peace of mind of all those BN political leaders has done an about turn and is now contemplating a return to the fold of UMNO? 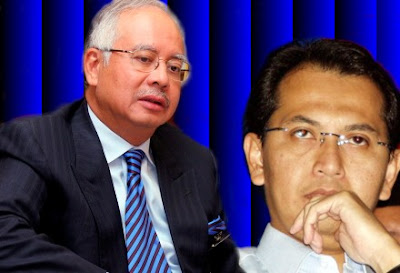 All I can say is that it seems to me that Ezam is just proving what people have been saying about Malaysian politicians all along?

All these talk about serving the rakyat and the nation is just pure hogwash.

At the end of the day, what these politicians are after is nothing but a fast track to political power and financial stability.

These chaps aren't like what true leaders of the people were?

People like Allah Subhanahu Wa Ta'ala's Final Messenger, the Blessed Prophet Muhammad Sallalahu Alaihi Wassallam who tied a flat piece of stone to his blessed stomach to ward off the pangs of hunger when he faced the economic boycott implemented against him, his family, friends and Muslims of Makkah by the Qureisyi Kaffirs.

Sahabah's of the Blessed Messenger Sallalahu Alaihi Wassallam such as Saiyidina Abu Bakar As Siddiq (RA), Saiyidina Umar Al Khattab (RA), Saiyidina Othman ibni Affan (RA), Saiyidina Ali ibni Abi Talib (RA) and thousands of other illuminaries who placed the interests of the people before theirs and sacrificed their wealth, their lifes so that the people could survive?

History records many other true leaders of mankind who gave their all so that their fellow humans could live a better life and they gave their life's for such noble causes?

Legends such as the assassinated Dr.Martin Luther King of America who lost his life fighting for equality of his fellow African Americans who faced apartheid in the days when being not white was cause enough to be lynched and hung by those who thought that dark skinned folks were lower than even dogs?

Icons such as the Mahatma Gandhi of India who led a peaceful struggle against the British Colonials who robbed and looted his motherland of India blind and was killed by a Hindu extremist.

There are countless other exemplar's whom I can mention here but I figure that you get the gist of what I am saying here?

I guess that Ezam will sure face a lot of flak from those who are already clamoring for a place in the political ladder to the top?

He surely will be facing the political clout of the Son in Law of the Pee Emm, Rembau MP Khairy Jamaludin and others who surely would not be rolling out the red carpet to Ezam to zoom right in and wedge his self amongst them clamoring for power and position in the crowded UMNO leadership.

Let's see what else transpires?
Published by MAHAGURU58 at 3:03 PM