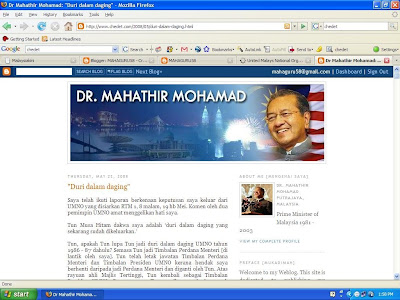 If there is one thing that I respect Tun Dr.Mahathir Mohamad is his willingness to do things that many shy away from like giving back to his detractors exactly or much more than what is thrown at him?

This is one Malaysian whom you do not mess with without arming yourself with the right defenses.

He is like the proverbial pit bull who will chew you up and spit you out like a crunched piece of bone!

Tun Dr.Mahathir Mohamad today has proven that although he is no longer the Prime Minister of this nation, he is still as powerful in his presence in the nation's political theatre.

Tun Dr.Mahathir Mohamad still has it in him to make folks like Abdullah Badawi, Najib Tun Razak, Musa Hitam, Shahrir Samad and all others who are still in UMNO lose sleep over his recent actions and political maneuvers. 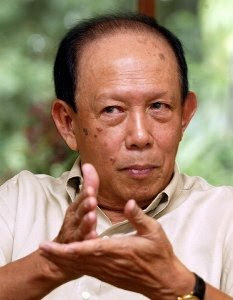 Tun Musa Hitam (former Malaysian Deputy PM and the one who gave the orders leading to the Massacre in Memali, Mukim Baling, Kedah Darul Aman) Musa Hitam was the Acting Prime Minister then and he ordered 200 policemen to attack the villagers who were supporters of As Syahid Ustaz Ibrahim Mahmood @ Ibrahim Libya. Read here to refresh your memories.
Did anyone ever suspect that Tun Dr.Mahathir Mohamad, the founder of UMNO Baru will quit in the manner and style that he did recently?

Did Abdullah Badawi ever imagine that Tun Mahathir will come after him as what he has done after handing over power to him in the first place?

Did Najib ever dream that he will no longer enjoy Mahathir's seal of approval to replace blundering Badawi as the country's future Prime Minister?

Mahathir bin Mohamad never ceases to amaze us with his twists and turns in his ever dramatic political career and the nation awaits to see what he is going to conjure up next to terrify the ones in the UMNO Supreme Council?

We have heard of the Star Wars trilogy ' The Empire Strikes Back'. Now we see the old fighter in the nation's most influential political juggernaut @ Tun Dr.Mahathir Mohamad strike back in a fashion that we have never ever seen him do so at his enemies and faultfinders!

Read here at Tun Dr.Mahathir's blog to see Mahathir sock it to Musa Hitam and Shahrir Samad who have sniped at Mahathir over his decision to quit the very party @ UMNO Baru which he himself set up after the original UMNO was unregistered by the Registrar of Societies back in 1987!

UMNO Baru only came into being when it was registered on Feb 1988 and today it's founder Tun Dr.Mahathir Mohamad, the former longest serving Malaysian Premier is out of the party that he founded.

As expected, UMNO's political bigwigs who would kiss his hand and grovel at his feet (metaphorically speaking) have now rediscovered their balls to attack and smash their former President due to their very nature of being first class apple polishers and loyal supporters of whoever is warming the Prime Minister's seat at Putrajaya!

The kind of politics you see in UMNO is the type that makes many good people shun away from getting involved in all the ass kissing, backstabbing, libeling, twisting and turning of principles that can be bought according to the numbers of zeros that adorn whatever cheques that passes hands or bank orders that come with the type of support that one garners or is willing to sell for a price, of course?

Not all Malays in UMNO are corrupt but the ones who are at the top almost always reek and stink of unsavory political tricks and actions that brings disrepute to the very party that is said to be the main pillar of the current ruling BN coalition running this nation's Federal Government of Malaysia.

Let's see what else unfolds in this continuing saga of I say this and you say that?

On a personal basis, yours truly underwent a similar episode recently that has yet to be settled.

Must be something in the air we breathe, eh?

UMNO's twist and turn politics sure permeate the very life's of Malaysians, no matter who or what we are or claim to be?

May Allah save us all!