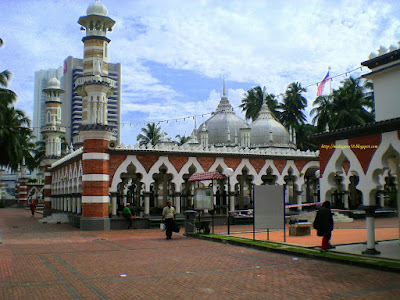 May Peace, Mercy and Blessings of Allah be upon those of you who submit to Him, our Creator, Lord and Master of all that is before us.

Dear brothers and sisters,
I took these photos below and video above yesterday Friday afternoon at the historic century old Masjid Jamek Bandaraya Kuala Lumpur and also around the Masjid India areas. 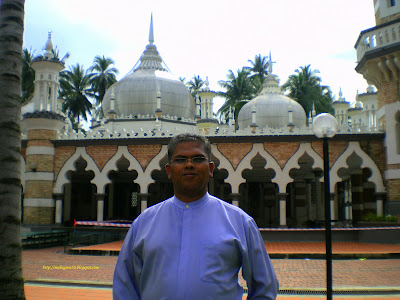 Every time I visit this masjid, I see changes taking place within it's premises.

Now they have added ceramic tiles to some of the open earth sections where Muslims used to lay down their prayer carpets when it is Friday and the praying space within the masjid is filled up and the congregation spills over to the courtyard areas.

Syabas to the masjid's administrators. May Allah SWT bless you folks.

Yet there are certain area's that still needs improvements. Especially the way the masjid staff are chasing away visitors to the masjid in not so pleasant a manner which I observed during my visit.

Two western tourists arrived around 4pm but were abruptly stopped from entering the masjid areas on reason being that it was near the Asar prayer times.

I managed to take a photo of them being ushered out of the masjid's premises by the masjid staff whom you can see standing at the gates. 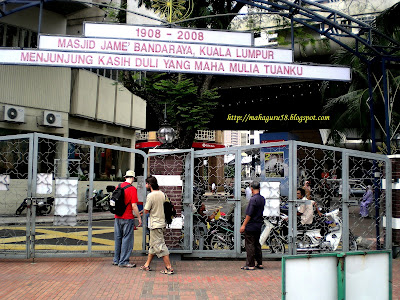 To me, that's stupid and should be abolished. I mean, what's wrong with allowing the visitors observe how Muslims pray?

Maybe, they will see that Muslims pray to only the Almighty and not to any idols or figurines?

Sometimes, the way Masjid administrative committees go about imposing regulations does more harm to Dakwah al Islamiyah than they get to protect the masjid from undesirable elements.

These are my sincere observations.

I am all for the visitors to be allowed to witness for themselves:
Failure to realize the tremendous harm that masjid administrators all over the nation and even the whole wide world are committing today by stopping entry of visitors during prayer times is a sad reality that we have to address immediately.

If someone out there comes to state that they are doing so out of concern for the safety of the congregation during prayer times, let me remind him or her that Death is a reality for each of us, regardless of where or how strong we fortify ourselves with the stringent measures available?

Well, that's my point that I ask for those who are reading this and are amongst the masjid's administrators who practice such measures, to take into consideration my plea that the present rulings be re-examined for the good of the faith.

Let me move on by sharing with you some portraits that I took of some interesting eye catching individuals whom I met in my trip there. 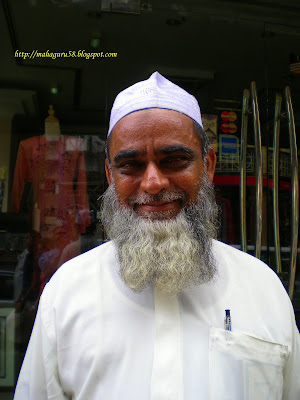 I came across this Muslim from India who was sitting at the steps of the Karyaneka office just before the masjid. His grand look with the flowing beard caught my attention and I summoned up my courage and approached him for permission to photograph him for my blog here.

He graciously gave me his consent and here is his portrait for all to see and appreciate. There is a certain calmness that I can detect in those who follow the Blessed Prophet Muhammad Sallalahu Alaihi Wassallam's Sunnah and keep their beards as instructed by the Chosen One.

Insya Allah, I have made a vow to start keeping mine when and if I reach 50 this 3rd of October, a couple of months from now.

Anyway, keeping the beard alone does not suffice if I as a Muslim fail to keep the other obligations of my tasks as a practicing Muslim.

Please pray for me that I will stay true to my faith and do advise me if and when I go out of line?

I thank you all in advance for that. 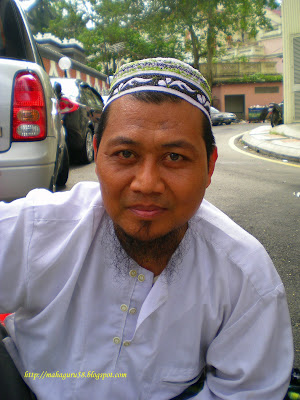 This here is a Muslim trader who was selling blood cupping instruments @ 'bekam' and other health improvement devices, spread on a canvas sheet.

Again, I saw sincerity of being in this brother and the calmness of his self doing business for the sake of seeking an honest living.

You too might be able to see the peace and tranquility of his inner person displayed on his radiant face?

That's what a firm belief in Ar Rahman can give to those of us who seek His Love? Insya Allah. 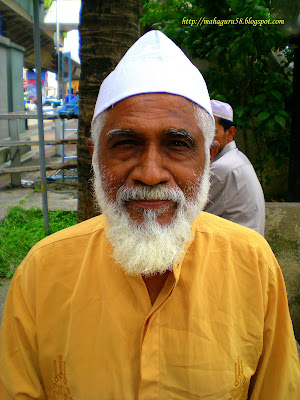 I have come across this Muslim who makes the masjid his sanctuary everyday. He has only one leg and goes about on crutches.

Yet, again I sensed his peace of mind as he basks in the knowledge that he is safe in the Mercy of Almighty Allah as he spends his days in remembrance of Allah Azza Wa Jalla in the blessed masjid. 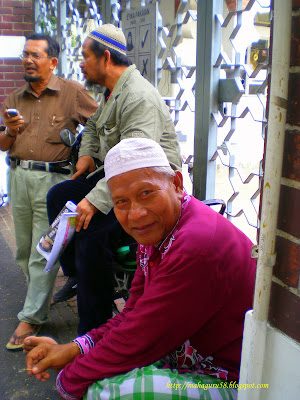 This brother was intrigued watching me going around taking photos of the Muslims who were around so I took this snap of him as well as he was taking a rest outside of the masjid's gates. 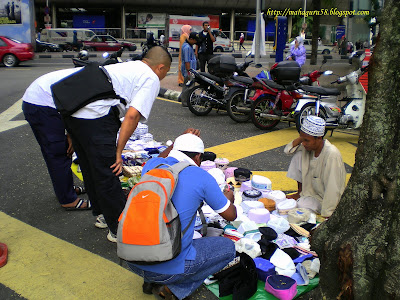 I end tonight's post with a photograph of a few Muslims who were busy choosing which prayer caps they wanted to buy from a trader who was selling such goods in the space in front of the masjid.

So, till we meet again in the next posting, here's wishing you all the best in life and praying that Allah Subhanahu Wa Ta'ala will watch over us and grant us our sustenance in this life and in the hereafter, Ameen.