Pakatan Rakyat do not have an Aladdin's Lamp!

I refer to the way certain politicians from the BN and also freeloaders from amongst the Malaysian general public keep harping on the Pakatan Rakyat State Governments to deliver on whatever they promised the voters in the 12th Malaysian GE? 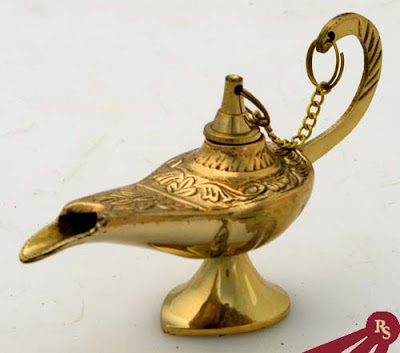 Sometimes I wonder if these people are living here on Earth or floating in their own delusions about the way they expect folks like Selangor Menteri Besar Tan Sri Khalid Ibrahim or Penang Chief Minister Saudara Lim Guan Eng to whip out an Aladdin's lamp, rub its side and out flows a genie who can fulfill all that these numbskulls are demanding of them?

People like Khir Toyo, the former Selangor Menteri Besar who during his watch brought about so much hardships to the people of Selangor and also was the cause of religious strife where temple demolitions took place indiscriminately due to the lack of public relations with the ordinary rakyat and brought about a state of restlessness and heightened sense of racial and religious conflict amongst the people and the uniformed security apparatus in the form of the FRU, local council enforcement agencies and the PDRM!

After losing his power and position in the Selangor State Government, Khir Toyo ordered the destruction of official state documents and files in order to cover his ass and the proof is right before us all but I have yet to hear of the Polis Di Raja Malaysia carry out any action to investigate this blatant criminal act of willful destroying of classified state documents that surely is wrong and must be prosecuted by the justice system?

The Pakatan Rakyat State Governments are just about 3 months old but already they are being asked to deliver this and that as if they have everything ready before them and can just dispense this and that as they wish?

Hello!!! What bloody hell kind of nonsense is this?

Those Pakatan Rakyat fellas had to start all over again in putting things in order!

They had no access to all the prior official systems and documentations that have been destroyed by each of the State Governments that were under the Barisan Nasional's rule in Pulau Pinang and Seberang Perai, Kedah Darul Aman, Perak Darul Ridzuan and Selangor Darul Ehsan!!!

They took possession of empty offices! Offices that had all their files and state official documentations destroyed and removed under the very eyes and noses of the Royal Malaysian Police!!!

To Khir Toyo and those who lodged police reports against the Pakatan Rakyat State Governments for " failing to deliver" what they promised in the 12th Malaysian GE?

Imagine yourselves to be in the positions of Khalid Ibrahim, Lim Guan Eng, Ustaz Azizan and Ustaz Nizar?

Do you think that these fellas are magicians or what?

Khalid Ibrahim is doing what he can within his position trying to set up from scratch a state government that is slowly but surely delivering what it can to the voters who elected the Pakatan Rakyat State Government after receiving a state system that you Khir Toyo have criminally destroyed maliciously willfully!!!

How so very irresponsible can you be???

To that fellow who lodged a police report complaining that he has yet to receive a RM1000 that was promised by the Pakatan Rakyat, all I can say is that please have some honor to earn your own keep out of your own sweat and do not be a freeloader!!!

As an able bodied Muslim, it is enjoined upon us to earn our own keep and not be a parasite!

"Alms are for those needy people who having given all their time to the cause of Allah are so pressed that they cannot run about for their livelihood. The unthinking man accounts them wealthy because of their restraint but you can judge their plight from their faces. They do not beg of men with importunity. And whatever good thing you give in charity, Allah will know it and reward you for it."

Verily, my brother, you can earn your keep and not impose upon those who have just been entrusted to run the State government of Selangor from scratch!

Give them time Insya Allah and they might be able to help you out if you truly have no other means to carry on living your life?

It is better for us to work and earn our sustenance instead of asking others for what we need.

May Malaysians be reasonable and allow the Pakatan Rakyat State Governments adequate time to settle down and get to grips with what has been left available to them to run those states which they now have taken control of?