I thought that the Penang Chief Minister Lim Guan Eng's flying economy story has had its day in the news and has now been relegated to the media archives?

Well, not quite it seems as The Star Online had gone ahead and taken Mr.Manager's photo of Ning standing besides Lim Guan Eng and cropped the picture effectively removing Mr.Manager's blog url from the shot and published the story in its site! 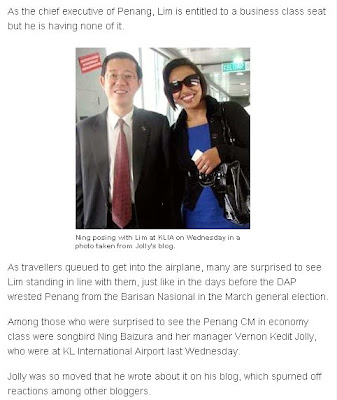 The Star Online's cropping of Mr.Manager's photo, leaving out his url which makes him go ballistic! 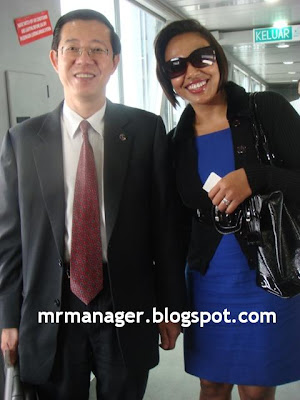 I know that the mainstream media are sort of facing a dire situation of trying to be one step ahead of the blogosphere as thousands of bloggers are cropping up daily and reporting about this and that before the mainstream news reporters and journalists can get their articles edited and approved for publishing nowadays?

The reason Mr. Manager is pissed off is because this is a national newspaper doing the copy cut and paste job without properly acknowledging his rights over his intellectual property copyrights befitting their position as one of this nation's major news organization?

Even though The Star Online mentioned in their report that they took the photo from Jolly's blog, they should have at least published the photo containing Mr.Manager's url in total!

That's why Mr.Vernon is fuming mad at their overlooking his rights to be properly acknowledged in their belated news report on Guan Eng's economy flight!

If The Star Online has no qualms about borrowing a Blogger's photo and run a story based on his blog posting, why must it be so hard for them to publish the Blogger's url which he has rightfully watermarked on his picture?

What do you think should be done here?

Should The Star Online apologize to Mr.Manager in their paper or should Mr.Manager sue them for cropping his picture and removing his stake on the image which we bloggers published in full and acknowledged him to being the original author of the story?

Check out Mr.Manager's blog here to read what his readers are saying about the matter?

Frankly speaking, I believe that it is only right for both Bloggers and the Mainstream Media to work closely with each other and accord to the original authors their rights and acknowledge the source of any material that either party takes and publishes in either the blogs or the print / broadcast media or even in the entertainment or movie industry whenever such a matter takes place?

Bloggers rely on the mainstream media as much as we see the major media companies having to obtain material from the Blogosphere.

All it takes is according to each other a bit of respect and common courtesy.