This aide is obviously another political scapegoat who has vested interests and a political agenda in volunteering his services to DSAI and as being written in many blogs of being a BN mole in the PKR headquarters.

He obviously loves being close to the BN leaders and ministers as can be seen by these photos. A penchant for rubbing shoulders with the cream de la creme of the BN leadership, eh? 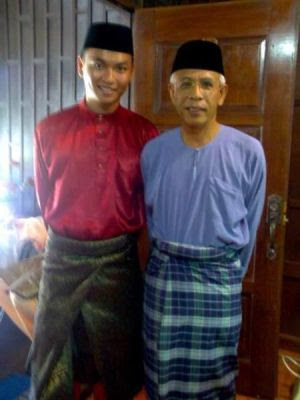 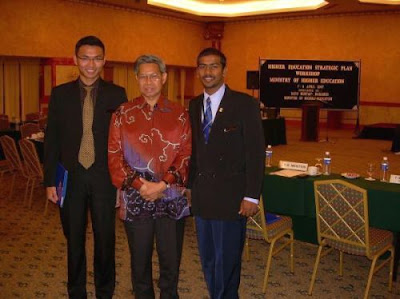 With Dato Mustapha Mohamad, the current Malaysian Agriculture and Agro-based Industries Minister (in batik). Dato Mustapha used to be the Higher Education Minister before the recent 12th Malaysian General Elections. 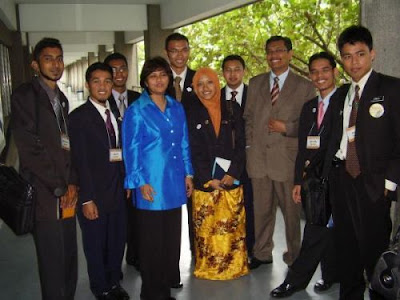 Saiful with the Malaysian Tourism Minister Datuk Azalina Othman (in blue) in a group photo. He is standing just behind her. 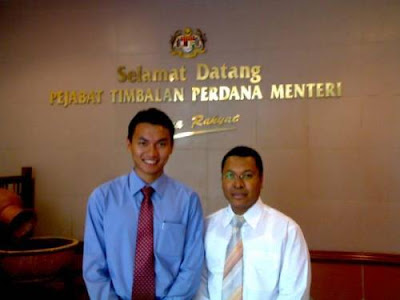 Best way for political remora's to tap in to the political juice is to be close to the high offices of government ministers.

Maybe soon someone will be posting a photo of this young man with the Imam Hadhari, the Big Daddy himself, eh?

In the political world, people will just do anything in order to shoot either straight up to the top or wing it for one's political mileage.

This young man sure seems to be deep in the Malaysian political jungle.

I am just wondering whether this sodomy allegation is not something cooked up by Anwar's foes once again as it has been proven to work in curtailing his spiraling climb to power during Mahathir's time and as they wanted, effectively cold storage him in prison for six years and then had him in limbo for another 5 years after being released?

Frankly, the best way to cut down someone with Anwar's background is to accuse him of sexual misconduct!

Many an alim has been accused of being zalim and destroyed spiritually, emotionally, mentally and their reputations soiled socially by their enemies using the sexual abuse card. So is this case.

I am not saying that Anwar is a 100% maksum or what but to accuse him of being a sodomite again is just downright dirty and totally abhorrable.

Are we looking at another wave of Reformasi that is going to witness many more innocent Malaysians be beaten and brutalized by the BN's Federal Reserve Units?

Are Malaysians in danger of losing their life's and risk injury to their limbs all over again?

I don't like the look of this. We are on the brink of another political disturbance that might just escalate into an all out confrontation between the BN and the Pakatan Rakyat supporters.

I learn that Anwar Ibrahim has sought asylum in the Turkish Embassy in fear for his life.

We are looking at the possibility of him going the way of Mahatma Gandhi, Martin Luther King Jr. and Malcolm X!

Altantuya Shaariibuu was bombed to bits and to this day, her accused killers are traveling incognito to and from the prison to the courts like nobody's business?

This is Datuk Seri Anwar Ibrahim, we are talking about?

The man whom Mahathir cut down and seen to it that he was packed up into the political wilderness for 11 years and now Abdullah Badawi and Najib are feeling the same heat from Anwar and suddenly, we have another sodomy case cropping up?

Seem familiar to you folks?

Ladies and gentlemen, be aware of what's happening. Our life's depend on us being in the know and learning to differentiate between fact from fiction or fall victims to malicious gossip?

Things aren't looking that good for us, the pawns caught in this web of deceit and political manouverings by those who are going all out to ensure their political monopoly over the Federal Government and Anwar Ibrahim who claims to have incriminating evidence against the Malaysian Inspector General of Police, Tan Sri Musa Hassan and the Attorney General Datuk Abdul Gani Patail for their roles in plastering Anwar in the 1998 trials?

As I type these words, things are getting hotter by the minute and events are unfolding that just might change this country's future soon.

They too are zeroing on to this case. Read and contemplate as to how someone close to Anwar can turn around and stab him in the back like this. Pun not intended!

May the truth prevail and seen to be upheld. Right now, word is that truth has been bought and paid for to the extent that it's willing to claim of being not only bought but sodomized as well?

Na'uzubillah! May Allah save us all. Ameen.
Published by MAHAGURU58 at 7:03 PM