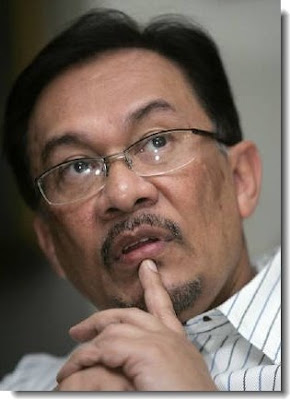 Datuk Seri Anwar Ibrahim who has taken refuge in the Turkish Embassy here in Kuala Lumpur fearing for his life after getting information from reliable sources of plans to assassinate him by his political enemies has issued this latest statement.

" I am issuing this statement from within the embassy of the Republic of Turkey in Kuala Lumpur.

I was transported to the embassy earlier this morning fearing that my personal safety was in danger. I thank all those who offered to assist me in this time of need and am grateful to the Turkish ambassador for extending an invitation to seek refuge within the embassy.

Since the March 8 election, numerous credible sources from within the government and military intelligence have advised me that certain agents from within Barisan Nasional leadership have initiated plots to cause harm to me or my family or my supporters.

I have been told that my assassination has not been ruled out as means to subvert the people's will and bring an end to the transformational changes taking place in Malaysia.

Notwithstanding the threats which are intended to silence my voice, I intend to make public new evidence implicating that Inspector-General of Police Musa Hassan and Attorney-General A Gani Patail engaged in criminal acts of fabricating evidence in cases launched against me in 1998.

The allegations that have been made against me on Saturday are nothing more than a replay of the events which transpired in 1998 when I was sacked from the office of the deputy prime minister, jailed and beaten, and then charged and convicted by a kangaroo court for crimes which I never committed.

This charade was orchestrated by a corrupt Barisan Nasional leadership which made use of the entire apparatus of the state power including its control of the judiciary, the police force, and its grip on the mainstream media.

These actions are being repeated today to undermine the forces of reform and renewal which were unleashed in the March 2008 election.

I would like to assure my family, friends and supporters in Malaysia that I am safe and remain committed as ever before to continuing the struggle for a free and just Malaysia."

It's a shame to see a Malaysian politician be hounded like this and forced to take shelter fearing for his life in an embassy of a foreign country in his own home nation's capital?

Why does the Malaysian Prime Minister not come forward and guarantee Anwar Ibrahim's safety if the BN really has nothing to do with this alleged sodomy case?

All that I see being reported is denials after denials being made by the PM and a few days down the road, we will all be flabbergasted by what is going to be plastered over all our television sets and online news portals and blogs?