Tuan Guru Nik Aziz says to UMNO ' No Thank You!'. 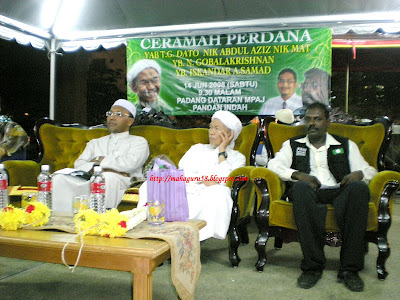 If there is one main thing that came out from the 'Ceramah Perdana' at the MPAJ Padang, Pandan Indah, Selangor that saw Tuan Guru Datuk Hj Nik Abdul Aziz Nik Mat speak on various issues that are currently being hotly discussed in the political theatre of Malaysia, it is the Kelantan Menteri Besar's stating openly to the UMNO leadership that PAS does not wish to ever return to the fold of the Barisan Nasional or co-operate with UMNO on the basis of Malay unity!

"No Thank you!" is what Tuan Guru Nik Aziz's response to the attempts by certain parties from UMNO to try reconcile with Malaysia's largest Islamic party on the grounds of wanting to ensure that the Malays will not lose their 'overlordship ' over this country! 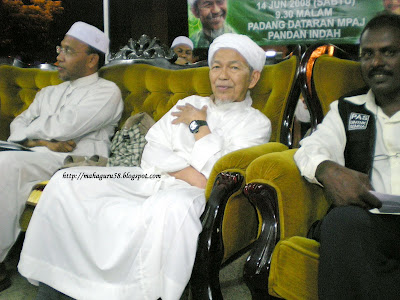 Tuan Guru reiterated that UMNO's political aims are not in line with what PAS has always struggled for?

UMNO is based on 'Assabiyah' politics which is race based politics and despite ruling over this country for 50 over years with the Chinese in MCA and Indians in the MIC under the Barisan Nasional Coalition, UMNO has failed to champion the rights of even the Malays whom they claim to fight for? 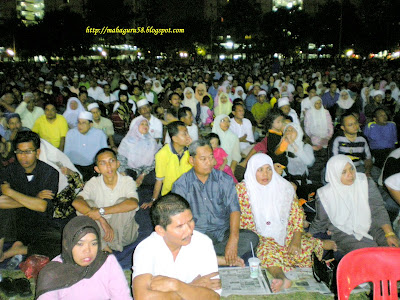 The only Malays who gain from UMNO's rule are those who are the creme de la creme in UMNO's top leadership whilst the grassroot supporters of UMNO are suffering from poverty and neglect just the same as all other people here in Malaysia?

Tuan Guru Nik Aziz shared with the crowd that to this day, the Barisan Nasional coalition partners are still wary of each other and are on the way out as far as political unity amongst the BN is concerned?

The Kelantan Menteri Besar who spoke in a low tone due to a bout of flu, still managed to share with the estimated crowd of 20,000 Malaysians who filled up the Pandan Indah MPAJ field that for all the allegations that UMNO fabricated against the State of Kelantan which has been under PAS rule since 1990, UMNO has yet to be able to help alleviate the status and plight of the Malaysian people?

Despite being an oil producing country, UMNO has yet to help the Malaysian citizens live a better life and instead have been adding problems after problems to the life's of the ordinary citizens of this nation.

More pictures and reports coming after this.
Published by MAHAGURU58 at 5:02 AM