The BN and PDRM seem to be in cahoots in denying Anwar a fighting chance! 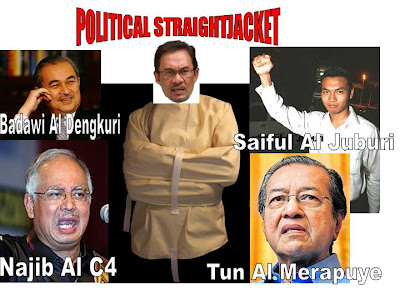 Never before in this nation's history has a candidate for a by election be plastered with an arrest warrant and then in turn come face to face with an all out media assassination of his character through a concerted effort like what the Permatang Pauh Parliamentary By Election candidate, Datuk Seri Anwar bin Ibrahim is undergoing right at the moment?

I have heard of people fighting with a hand tied behind one's back but in this case Anwar Ibrahim seems to be politically straightjacketed and bound from top to bottom.

I mean just picture the scenario:
I mean if I am to list down and write in detail about the long list of people with vested agendas who would so love to stab Anwar all over his person and gut the fella as what the infamous hanged bomoh Mona Fandey did to Datuk Mazlan a decade ago; will take me the whole night to finish?

Just suffices to say that if Anwar manages to pull this off by beating this sodomy charge and still manage to win the Permatang Pauh By Election, then it will surely be a story that will be told time and times again till Doomsday as far as this nation's political conspiracy and struggle of one man against the entire Barisan Nasional behemoth of a Federal Malaysian Government!

Against all odds is the story of this man called Anwar Ibrahim, the political David facing his BN Goliath! 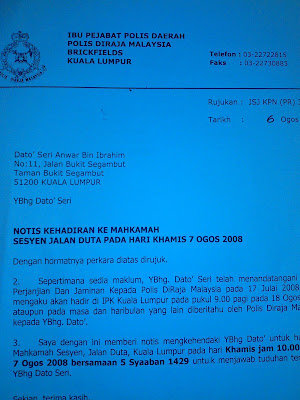 Let's see what unfolds tomorrow at 9.00 am , Thursday 7th August, 2008 as he is going to be charged at the Sessions Courts at the Jalan Duta Court Complex with having 'sodomized' the strapping 23 year old Saiful Al Juburi, whom I suspect to be nothing but a 'political gigolo' engaged by those who will spare no quarter to stop Anwar from heading towards taking over the Federal Government with his Pakatan Rakyat coalition members.

We all know that the Pusrawi Medical Doctor who ruled out any traces or medical proof of the 23 year old of ever been sodomized is now doing a 'Bala' and is missing in action?

So, I wonder, since the alleged sodomy case has been over a month, how the hell has the Malaysian Police managed to come up with Anwar's semen in that idiot's arse if they are going to charge him with that trumped up charge again? 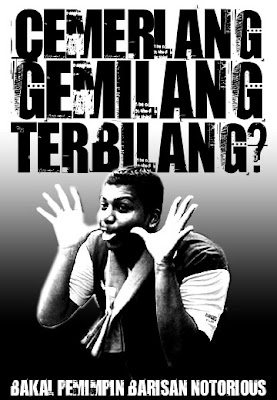