Sometimes it is more effective when a report charging the BN of using every dirty trick in the book is accompanied by visual evidence to back it up as shown by the pictures below!

This strong evidence of BN's foul play has been highlighted by the Wartawan Rasmi Laman Reformasi.

Take a look at how the BN imposters have tried to portray themselves as PKR supporters by using fake PKR logo and insignia on the vests that are identical to the ones used by bonafide PKR members. 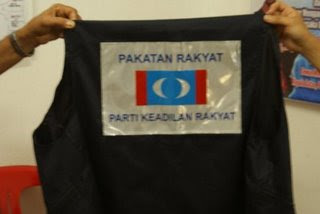 At first look, one would think that this is an authentic PKR supporter's vest! 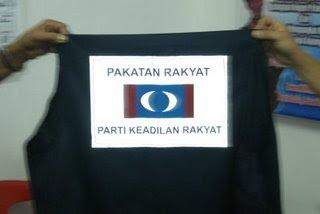 When it is closely examined, it is found to be not quite the real McCoy? How come? 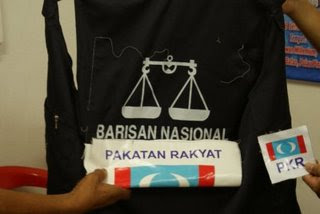 Voila! Look at what we have here? The printed logo of the BN glares at us! Talk about shysters at large!

We have the BN resorting to such a low down, dirty trick meant to beguile unaware Permatang Pauh folks to think that those who sport such 'PKR' vests are really from the Pakatan Rakyat Coalition!

My! My! My! And there are still some folks here in Bolehland who worship the skewed balance as being a symbol of righteousness and fairplay?

Play they surely do! Play us out! With these kind of masquerading as the other contesting party!

So, dear voters in P44 Permatang Pauh! You do need to really check as to who some party supporters are when you see 'them' do monkey business in the garb and vests of supposedly this or that political party? 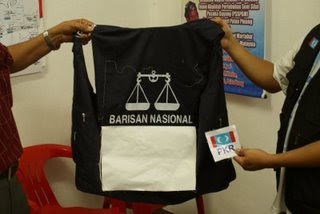 Now, that we have these clear evidence of foul play over there in P44 Permatang Pauh, I wonder whether the Elections Commission will do anything about it and take action against those who have blatantly committed election fraud and criminal misrepresentation?

Do you think that the EC would even move a lethargic muscle or bother to react and respond to such a dirty trick?

I don't know. I hope so for the sake of upholding the truth and justice.

I mean, Abdullah Badawi now comes across wanting to be seen as a really just person by trying for the first time after taking over power in 2003 from Mahathir Mohamad as a Prime Minister to show that he means what he says by taking LRT rides, etc?

I would even sing him praises if he takes the bus and queues up just like anyone else and have a taste of how frustrating it can be for common folks in using the available modes of transport?

The Khalifah's of Islam used to go about incognito to see for themselves as to how things really are in their areas of governance?

Who bothers to do that nowadays?

I was at the Putra Masjid yesterday and saw Najib come in a bit late during the khutbah with his entourage of bodyguards. He walked right up front to the first row @ saff and settled down.

When he left after the prayers, I didn't see people rush to give him salam as they would do to Anwar or even Mahathir?

What does that tell us?

That people aren't that excited to greet Najib? Wallahu Alam!

We can't prejudge anyone, right? Nevertheless, one's infamy precedes oneself and no matter how much Abdullah Badawi and Najib try to project themselves lately, the damage has been done and the grassroots are clamoring for change!

Would we see such a change in the coming P44 Permatang Pauh Parliamentary By Election on the 26th of August, 2008?

From the way, BN is resorting to all the lowliest tricks and dirty measures to try and swing the voters support for them instead of the ever popular Anwar Ibrahim, looks like they will have to keep on trying their very best in going all out to stop the political tsunami from sweeping them off and out of power this time around?

For the present moment, at least open your eyes wide and see for yourselves the proof that it is not Anwar who is going to be buried politically but the Barisan 'Cemerlang, Gemilang, Terbilang, Temberang' Nasional!

Permatang Pauh P44 voters, the future of this nation rests with you.