KLCC Surau's are closed for renovation!

Those of you who frequent the KLCC Surau's at the Concourse Levels, please take note that both the Male and Female Surau's are closed for renovation with effect from today, the 8th of August, 2008.

According to the signage at the concourse level, the KLCC Surau's are closed for renovation for a total of 20 days from today.

Those who frequent KLCC are hereby advised to head towards the As Syakirin Masjid in the grounds of the KLCC Park. 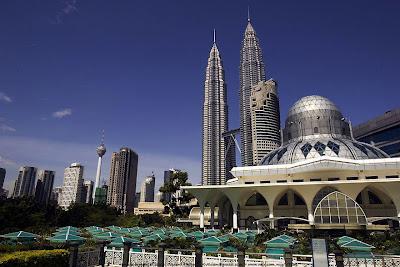 I was just as dismayed as the hundreds of other Muslims, some from foreign countries who were caught unawares just as we made our way to the surau's at maghrib.

The Suria KLCC Management should at least have cordoned off the area just at the entrance to the surau and built a temporary surau for the usage of the many Muslims who frequent the nation's most visited tourist and shopping destination?

When they can spend hundreds of thousands of ringgits on erecting stages and concert stands that are just wasteful and distracting mankind from remembrance of Allah the Almighty, can't they have spared a thought about the spiritual needs of this nation's Muslims who work at KLCC or visit the famous landmark in the capital city of Malaysia?

I felt sad to see some of our Arab visitors praying at the entrance to the surau's without being properly prepared for such a sacred obligation of each and every God loving Muslim!

I have heard about the Suria KLCC Management office easing out Malay Muslim establishments out of the 'high class' metropolitan capital city landmark but this blatant disregard for the Muslims need to have a place to pray at their workplace is just too bloody insensitive and callous of the Suria KLCC folks?

Does Malaysia really deserve to call itself an 'Islamic Nation' when it has such types of people running such complexes which are visited by hundreds of thousands of people from both the domestic and international areas daily?

This country prides itself on having those who masquerade as Islamic leaders but its all just a charade of the highest order when we really, really look at how things are being managed at the grassroots level?

The Malays have a saying that is very fitting for this nation's scenario: