I am referring of course to the way some of the men who volunteered in providing security control overexercised their jurisdiction when they assaulted a Guang Ming Daily woman photographer for getting too close to Datuk Seri Anwar Ibrahim at 11.35p.m on the 3rd of August, 2008 at the Seberang Jaya Agricultural Exhibition Centre!

Anwar Ibrahim had spoken to a 10,000 strong public gathering in conjunction with his by election campaign for the Permatang Pauh Parliamentary seat, recently vacated by his wife, PKR President Datuk Seri Dr.Wan Azizah Wan Ismail. 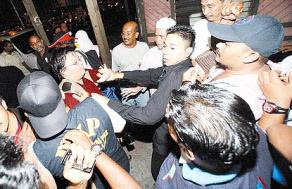 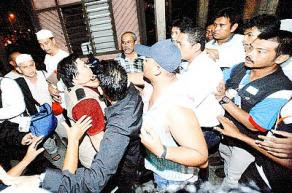 She was kicked , grabbed and choked by her throat and viciously chopped on her neck. She was also hit from the back, causing her to feel dizzy.

All these because she dared to get too close to take pictures of the PKR Supremo?

Talk about over zealous assholes masquerading as Anwar's bodyguards!!!

Where the hell were these guys when Anwar was manhandled and bundled off to the IPK by the PDRM's balaclava clad Special Forces? 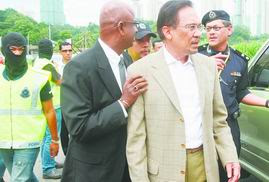 Then they would have met their match or in turn be smashed to smithereens by the Malaysian Police Special Action Unit commandos wouldn't they?

Of all the lousiest things to do to a female??? 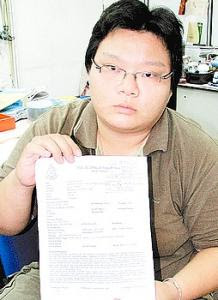 Now, the Parti Keadilan Rakyat is getting bad press from the ensuing media write up's and the pending police investigations following the police report lodged by the assault victim!

Instead of endearing themselves to the Malaysian people, these so called PKR idiots have now earned the wrath and curses of the media fraternity and may even see the PKR's events not covered anymore by the affected Chinese Media Journalists Union or Association?

Are the gangsters masquerading as the PKR security detail happy now?

I just don't understand how the Parti Keadilan Rakyat can afford to keep screwing up day in day out with these kinds of voluntary vermin?

Now it's these marauding assholes pretending to be Anwar Ibrahim's security detail?

Before this, we had the Stadium Kelana Jaya event featuring Carburator Dung show me your ass fiasco?

Are you guys worthy of our continued support or should we just forget all the hell about giving you guys a go at governing this nation?

Remember that you can't afford to mess up with the Rakyat and yet claim to be Parti Keadilan Rakyat?

What bloody hell kind of 'KEADILAN' is that?

Beating up a female press photographer?

What was her crime?

Did she shove her camera lens up Anwar's ass or what?

Sheeeessshhh....talk about monkeys getting flowers!!!