If there is one thing that we ought to be thankful for the internet is this being able to just fight all the misleading news and reports being bombarded to the nation by the mainstream media who are going all out to paint the Pakatan Rakyat supporters as being the ones who are playing it rough over there in the P44 Permatang Pauh Parliamentary by election political battlefront?

Well, we all know how totally biased and cockeyed our mainstream BN asskissing media can be and the way they capitalize on every little incident and event that is sparked off by just everyone who loves to keep the BN ruling and lording over us for the $$$$$$$$$ that comes their way in the form of allowances and bonuses paid out to ensure that the BN gets to wrest the Permatang Pauh seat away from the PKR? 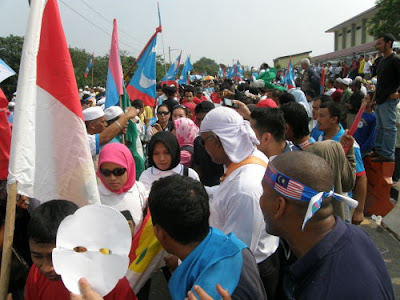 We were presented with this scene of Puteri UMNO going through the gauntlet of Pakatan Rakyat supporters who taunted them and harrassed the 'little miss pinkies' all seemingly so innocent and sinless?

Well, please rub your eyes awake and check this out! 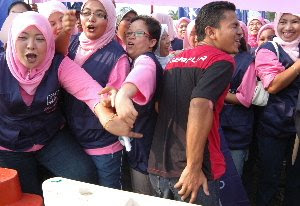 Aisey!!!! Little Miss Pinkies aren't that nice anymore, are they?

As they say, a picture speaks a thousand words! Not nice words, I may say!

Here they are seen taunting the Pakatan Rakyat supporters with antics that are reminiscent of the antics of the indie punk group Carburator Dung who caused a near riot at the Kelana Jaya Stadium recently! 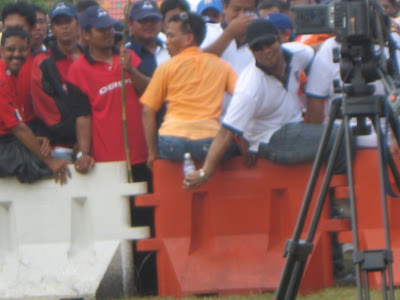 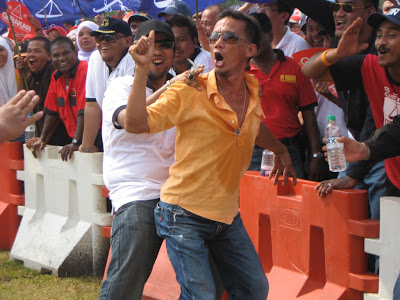 So Malaysia! Who do you think ought to be reprimanded and exposed as the agent provocateurs at Permatang Pauh?

I learn that UMNO has engaged the nation's infamous Mat Rempits to wreak havoc over there in Permatang Pauh as shown by these pics sourced from Chegubard's blog. 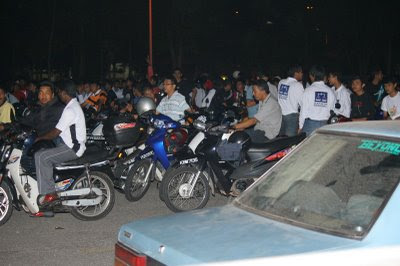 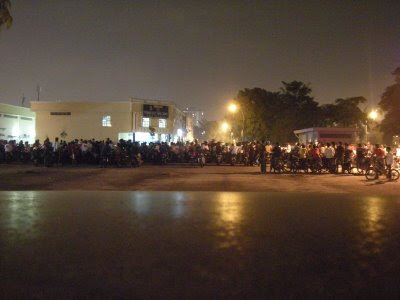 I think very soon, the nation will be reading news that 'Pakatan Rakyat' supporters have been terrorizing the Permatang Pauh residents with their 'rempit' antics late in the night, eh?

I mean, how hard is it gonna be for the UMNO fellows to get hold of PKR T shirts and logos to be emblazoned very, very prominently for the media cameras to capture and broadcast it in the prime news over every mainstream media channel especially during these campaign period?

So dear P44 Permatang Pauh voters, do enlighten yourselves as to what's being perpetrated by the BN in your parliamentary!

You need to know that what you see isn't always what they really are?

As they say, it's political theatre time! Guess who are the main players?

Just know that this is going to be the dirtiest by election that we have seen in a very long time!
Published by MAHAGURU58 at 11:26 AM