Who would you believe? Anwar, Saiful, Ezam, Abdullah Badawi or Najib?

I just returned home here to KL after a weekend trip to Kuantan, my missus's hometown to attend a Majlis Aqiqah for our grandniece, Ainul Mardhiah and also took part in a Majlis Tahlil, Remembrance Prayers for our departed family members.

I saw an accident along the Bentong-KL Highway where a vehicle was on all four tyres up towards the sky. I just snapped this scene as I was driving towards KL. This accident was on the highway heading towards the Karak Highway. As usual, traffic was snarling up when we were passing that area. There were traffic police at the scene. 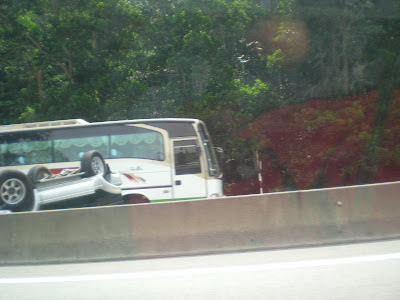 Now that I am home, I wasted no time in checking up on the latest developments as far as the political situation concerning Anwar Ibrahim's proposed Permatang Pauh By Election?

Looks like the PKR Supremo is facing two persons who claim to know his secrets and are threatening to disclose all very soon?

To me, these two individuals are just political opportunists who were remora's sticking to Anwar's butt when things were sweet and juicy for them but when things started to get too hot to handle and uncomfortable, they swim away to the outstretched arms of the UMNO desperadoes who need all the help that they can get in thwarting Anwar's political renaissance in the national levels. 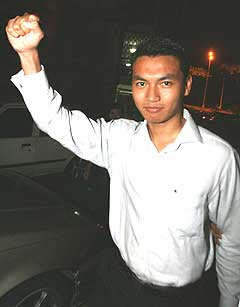 If Saiful was really true to his words and moral integrity as a young Malay student leader, the very first attempt by Anwar to misbehave towards him as what an attempt to sodomize the lanky, strapping young man as what we can see, he would have whacked Anwar senseless and made his self appreciated by all and destroyed Anwar physically and politically?

On the contrary, this able bodied 23 year old young man claims to have been sodomized so many times by the 61 years old back pained stricken Anwar Ibrahim?

Can you believe such a thing?

I for one don't buy these allegations. If such a thing did really take place and it is proven that Anwar and Saiful did really commit such an abominable filthy misdeed, then the Islamic ruling is very clear about this?

Rasul Sallalahu Alaihi Wassallam has ruled that both parties are to be put to death!

The hadith is narrated on the authority of 'Abdullah ibn 'Abbas that the Prophet said, "If you find anybody committing the act of the People of Luth (i.e. sodomy), then kill the one doing it and the one with whom it is done."

So, who do you believe? Anwar or Saiful in this case?

If the police have received a report from Saiful as being bandied about by the mainstream media, then why have the police kept the nation in the dark about such a report for over a month by now?

If they have proof as it seems by the Deputy IGP's manner of speaking, then why the hell are the police letting the matter slide?


You either charge Anwar with the crime or you shut the hell up and let the man carry on with his life! That would be the best way to prove that there is still some bits of justice left in Malaysia.

Now, moving on to the other fellow baying for Anwar's blood - Ezam, Anwar's onetime closest aide and lieutenant. 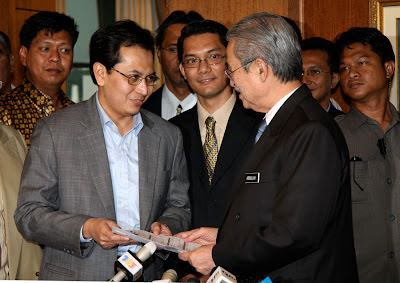 Now, this fellow has taken the art of backstabbing to a new record low.

This is the very same guy who defended Anwar to the max and today, he has proven the idiom that in politics there is no such thing as a true friend or permanent enemy?

To me, all these seems so downright dirty and embellishes the fact that some politicians can and will sell their souls to the devil or in this case to UMNO to make their ends meet?

Where the hell are all those six boxes of evidences that this fellow threatened to expose the BN UMNO top cabinet ministers all those years that he was chummy chummy with Anwar and the PKR as their National Youth Head?

Now, he claims that he is going to reveal all of Anwar's secrets in view of Anwar contesting the Permatang Pauh Parliamentary By Election!

Do you folks believe in this man who cried wolf so many times that people in the Pakatan Rakyat have now totally disregarded his bark as just that!

Whom do you believe? Anwar or Ezam?

I don't even wish to waste your time asking about Abdullah Badawi or Najib Tun Razak for both of these fellows have turned our Malaysian life's into pure torture ever since the old dictator Dr M. quit his post as the PM and left us in worse off hands of the sleepy headed Imam Al Hadhari and the DPM who plays safe too much to even merit our attention?

I say let's see whether these BN Government has the integrity to allow a free and fair by election at the Permatang Pauh Parliamentary?

If they try to fabricate evidence by asking Anwar to surrender his DNA specimens again, chances are that DNA specimen will mysteriously end up after a month in one fellow's arse and the ones who think Malaysians are downright stupid to be so bloody gullible as to believe that Anwar bin Ibrahim has no other thing on his mind 24/7 except to go around sodomizing strapping 23 year olds as he damn well pleases? 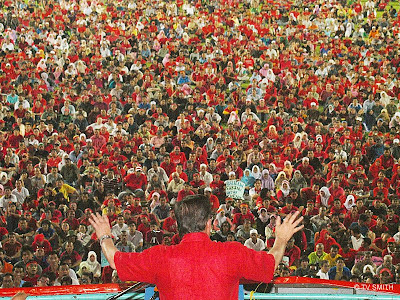 Who would you believe? Anwar, Saiful, Ezam, Abdullah Badawi or Najib?

I for one believe in Allah Subhanahu Wa Ta'ala and I pray to Him, Almighty Lord to show us the Truth as regards to this fitnah that is assailing us who believe in Him, Azza Wa Jalla!

Verily You will not allow the Zalimuns to prevail!!!

Show us that they won't get away with all these fitnah O Allah!!!
Published by MAHAGURU58 at 9:25 PM