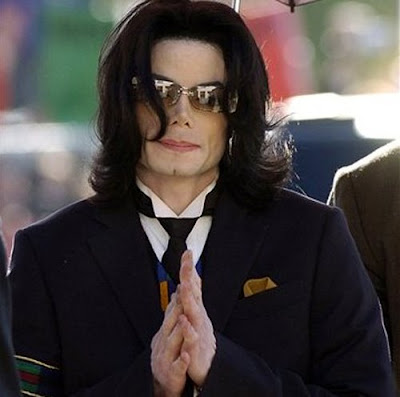 Micheal Jackson, the King of Pop music has embraced Islam at a ceremony attended by Yusuf Islam a.k.a. Cat Stevens, another superstar who has become one of the best Da'ee's @ Callers to Islam since he himself became a Muslim many years back.

He has chosen the name of the Angel of Allah, Mika'el Alaihis Salam as his Muslim name. The similarity of the Christian name of Michael to Mikaeel could also be a reason why?

He declined to use the name of Mustafa @ the Chosen One when offered to him by his Muslim friends who were there when the occasion took place.

The reversion of Michael Jackson to Islam took place at the home of an original member of Toto, a famous band back in the 80s, keyboardist Steve Porcaro, Hollywood Hills, Los Angeles, USA.

Mikaeel Jackson is famous all over the world for his hits such as 'Beat It', 'Thriller', 'Bad', 'Billie Jean', etc.

The King of Pop is best known for his amazing transformation of his skin color from being black to white through a series of treatments and for his eccentric behavior of sleeping in an oxygen tank, his reclusiveness, creating Neverland, his private 'Disneyland' type of entertainment park , etc. This site records the transformation of Mikaeel @ Michael Jackson through his life.

Reality of what a botched up series of plastic surgeries can do to one's features is just quite scary as witnessed by the sufferings experienced by this man throughout his life.

I feel sorry for Mikaeel and wish that one day, some gifted plastic surgeon can really do him justice and restore to Mikaeel a face and especially the nose that would make him look normal again.

As a Muslim, I welcome Mikaeel's reversion to Islam, the very faith that our souls attested unto and wish him well.

We are all humans and tend to commit slip ups and errors in our own individual lives. We have an Age of Ignorance and gradually come to a stage where we acquire an Age of Knowing and Learning.

Through our own efforts and the work of others, we gradually evolve to be who we want to be?

Mikaeel Jackson is only right in becoming a Muslim. He now needs all the help and prayers that we who are Muslims can give him.

The past is just that. We all need to look towards the future.

I believe that Mikaeel's talents will do him well in the field of Nasyeed such as what Yusuf Islam @ Cat Stevens, Sami Yusuf, David Wharmsby, Zain Bhikha and other prominent Muslim personalities in the world's Nasyeed scene.

Good luck to you Mikaeel Jackson. May Allah bless your heart with the peace and tranquility that you have been seeking for all this while.