When Malaysia's Muslims are pitted against each other ~ Guess who gains? 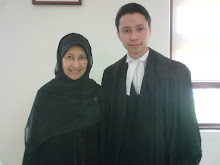 Dr.Norshinah Kamaruddin (photo) who lives in Bangi, Selangor and blogs at RAINBOW OF TRUTH.

Dr.Norshinah aptly explains how the present state of affairs between the bickering Muslims of Malaysia can be due to a cleverly orchestrated non military offensive against the sovereignty of this country's Malay Muslim leaders by the manipulation of a Washington favoring Neo-Con operative who now heads one of the 3 major Opposition parties of Malaysia.

Dr.Norshinah has written an article here which exposes the modus operandi of those who failed to take control of this country through the failed IMF measure in 1998 when Tun Dr.Mahathir Mohamad, Malaysia's 4th and most illustrious Premier thwarted an attempt by his Deputy Dato Seri Anwar Ibrahim, who was also the Finance Minister from borrowing money from the International Monetary Fund during the orchestrated global financial crisis which would have seen Malaysia become a pawn of those who have vested agendas against this emerging South East Asian nation as a major player in this region's political and economical growth.

Dr.Norshinah quotes from a book which exposes the non military warfare offensive which is being clandestinely carried out against this nation by those who have ties and links to the opposition figure.

Could this be true?

From the looks of it and the constant goading and needling of Malaysia's ruling government by utilizing the emotions and passions of the easily influenced Malaysian Malay Muslim masses by inciting them to run riot at every given opportunity and the non ceasing series of protests and demonstrations being called for and organized by those who seem to be pawns in the power game being played out by those in question, this could really be a fact and not a figment of one's imagination?

Thank you for alerting me to this angle and perspective of looking at the recent spate of demonstrations and protests being orchestrated by the masters of deceit and manipulation using religious issues and circumstantial turn of events which has seen a death taking place which has all the trappings and designs of a made for politics murder which has erupted into a frenzy of anti establishment by those concerned.

So what say you dear Ikhwanul Muslimins and Muslimats of Malaysia?

Does the dear doctor here make sense?
Published by MAHAGURU58 at 5:39 PM