It was a nightmare! There were a lot of joggers and walkers hogging the limited cycling path and no complete round the park track for me to enjoy my ride.

No point in ringing my bell to warn the folks ahead of me either as quite a number of them seemed to be either deaf or just plain lazy to move aside to make way for me.

One or two had their earphones plugged in so that's understandable. But some clearly do not bother to move aside as they plod on like lumbering gargantuan's trying to burn some excess fat off themselves! :P

After an hour or so, I decided to call it quits and I cycled home feeling pissed off at the inconveniences I had just gone through.

Yesterday, I decided to go cycling all the way to KL City. From my home in Cheras, I cycled along Jalan Loke Yew heading towards Dataran Merdeka. Along the way, I had to watch out for speeding cars and other vehicles as there are no dedicated paths for cyclists on our roads.

It was tough too as certain stretches of the road was going uphill and I strained to pedal my way up and remain safe as well. My aging thigh muscles screamed as I pedaled on aiming to reach my destination. I had no choice but to keep on cycling. There's no turning back once you are on the road.

When my legs started to ache, I stopped by the roadside and rested for a while, making sure that I was safely out of the way of speeding motorcyclists and motorists. In Malaysia especially on our city streets or roads, there is no such thing as motorists having common courtesy or concern for other road users.

They will turn into cruel, vile monsters once they are holding their automobile steering wheel or revving up their motorcycle throttle. The tendency to speed is always there. So, it is entirely up to us to stay away from imminent danger and watch out for our own safety.

I wear appropriate cycling jersey which is quite visible, switch on my bike's rear red blinking safety lights and have my cycling helmet securely strapped on, wear gloves and proper boots.

I reached the area near the KL Railway Station and stopped on the raised curb to catch a breather. 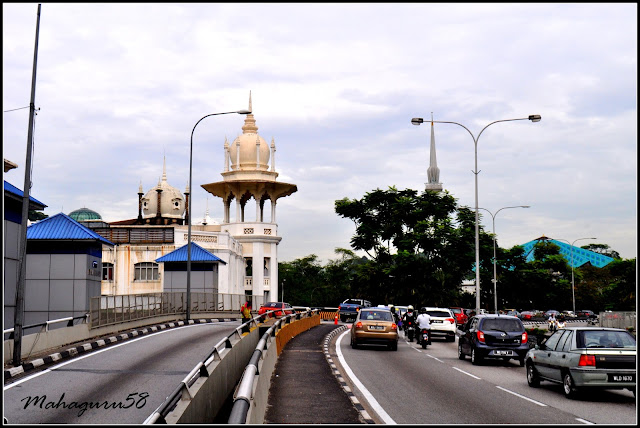 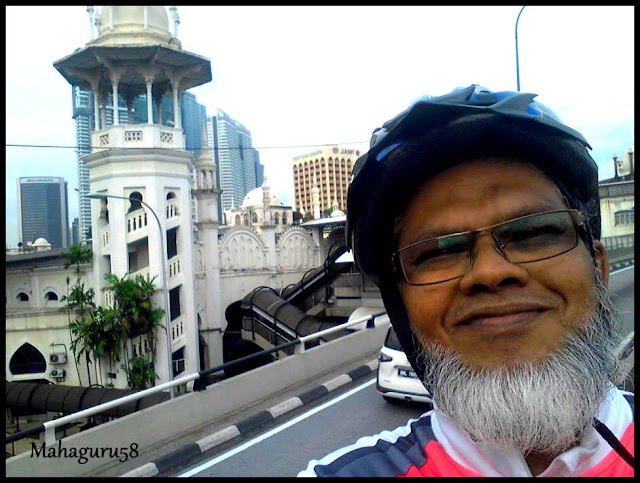 Every now and then, a motorist driving by would give me a supporting honk! Bikers would also give me a smile and thumbs up! Must be rare to see an elderly bicyclist like me on the road! What more with my white bushy beard! Hahahaha!

The road leading to Dataran Merdeka was blocked but as I was a cyclist the cop manning the area allowed me to ride through. Cars and motorbikes were diverted away to the overpass heading to Jalan Kuching.

I came upon a very large crowd of people who were in athletic get up. It so happened that there was a Great Eastern Insurance Company's sports event being held at Dataran Merdeka. Hence, the road closures and large crowd!

When I took out my Nikon D5000 DSLR camera to shoot some photos, I discovered that the lens cap had got stuck to the thread of the filter lens! Oh no! :(

I stopped near a police officer who was there and asked for his help in getting the lens cap free and he did! Thank you Corporal A.Rahim! I then took a photo of him and then had a German expatriate take a shot of us together. Here they are: 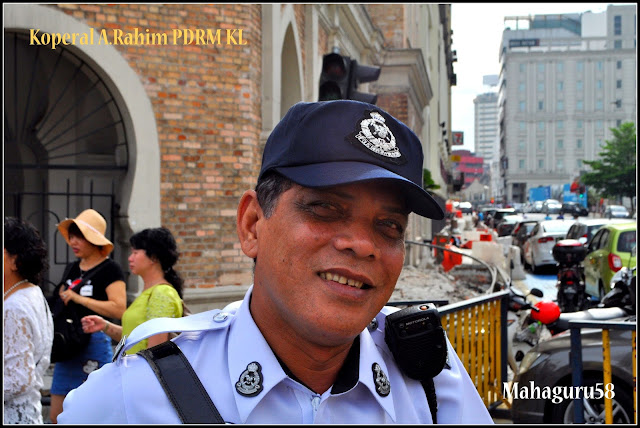 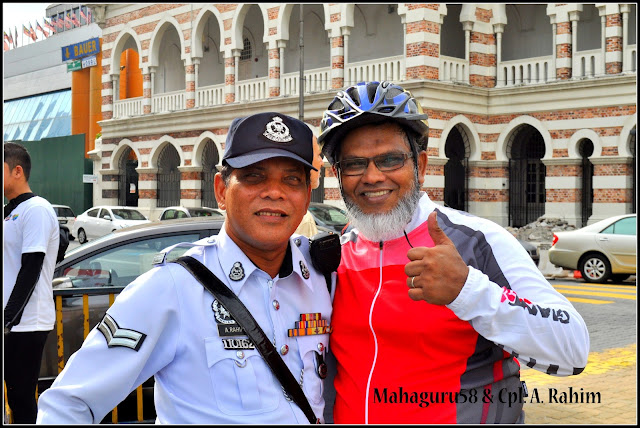 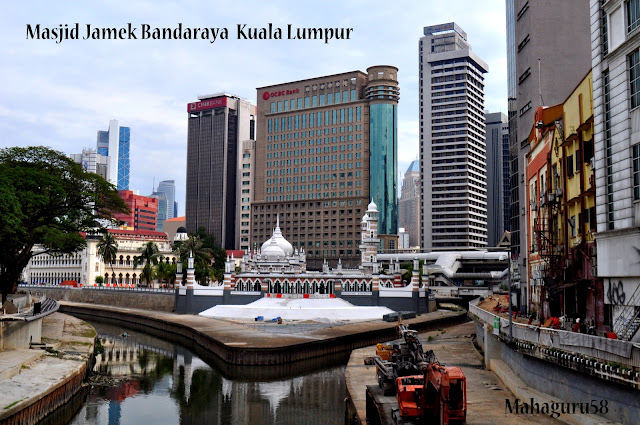 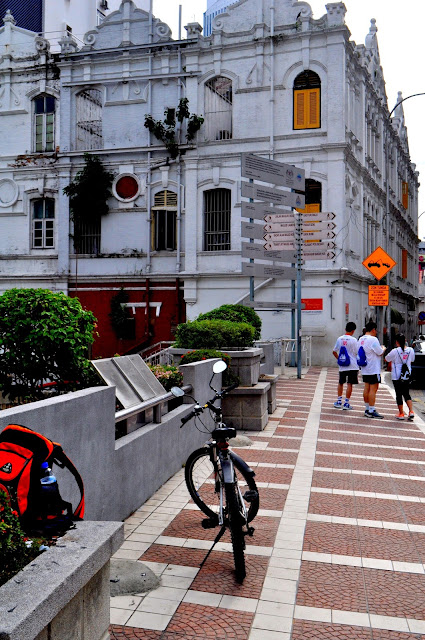 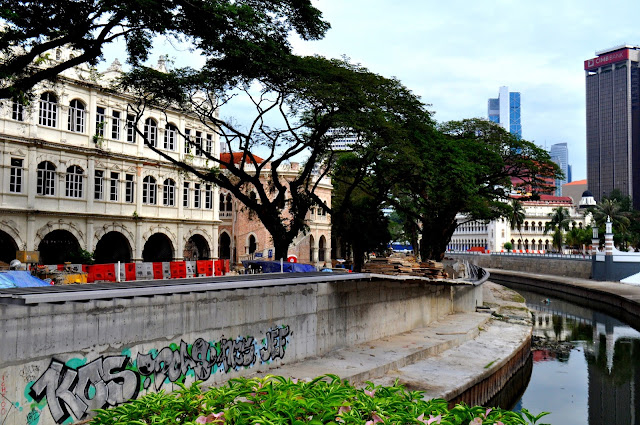 I stopped to take several photos of the landmarks around and then rode off towards Masjid Jamek.

Masjid Jamek is currently undergoing several improvements. They are adding a new feature at the masjid's compound. Shades in the form ala the unfolding umbrellas at Masjidil Nabawi in Madinah, Saudi Arabia. 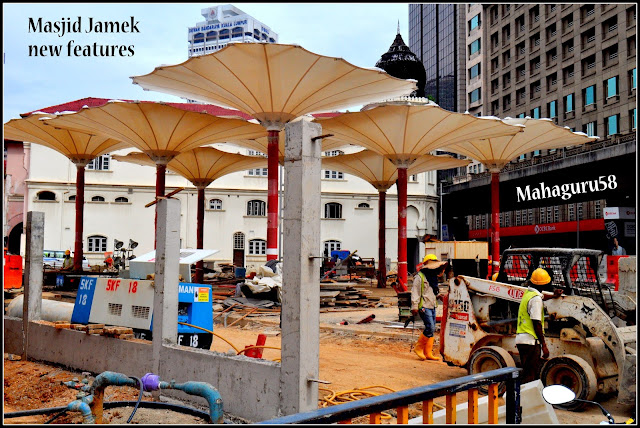 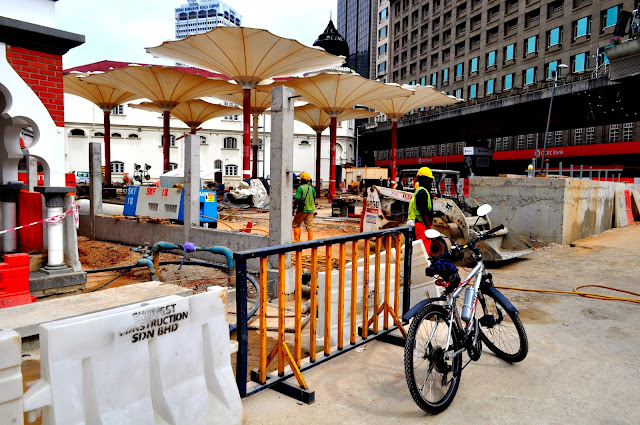 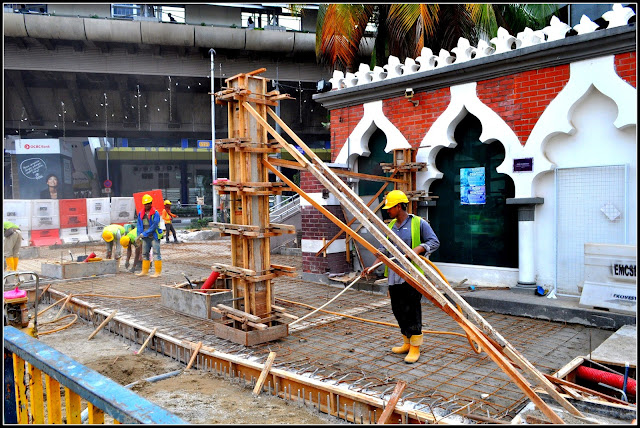 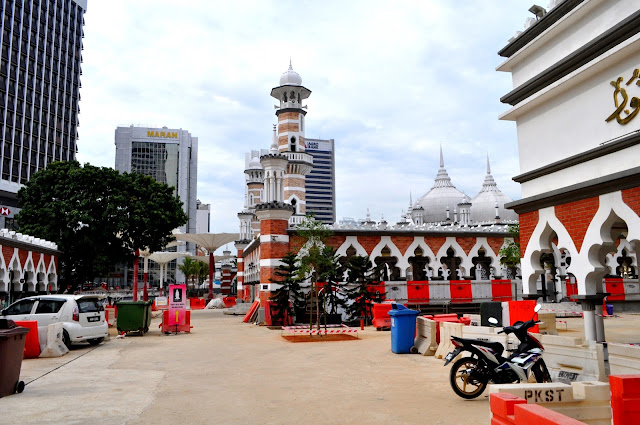 I spent some time talking to a Masjid Jamek staff sharing with him about how to share info n Islam to the visitors who come to the masjid.

I also shared Islamic Knowledge with the Indian construction supervisor who was a Hindu (wearing the safety vest and construction safety helmet) before riding off to Jalan Masjid India. 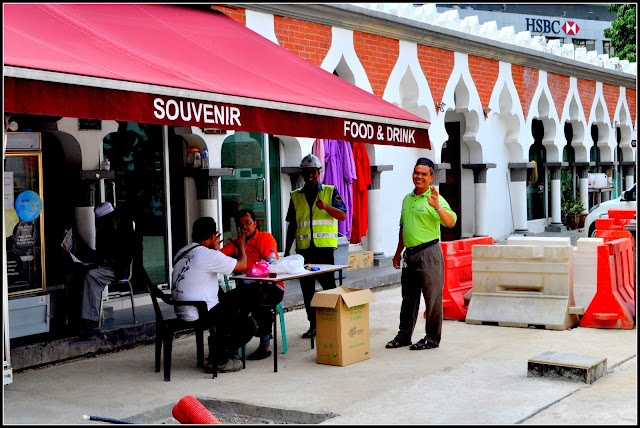 Both of them were very receptive and interested in learning more about Islam. Even born Muslims need to be taught about the inner aspects of being a knowledgeable and practicing Muslim.

Those of us who have come to acquire and learn about the deeper knowledge and 'Ilm of Al Islam must in turn share it with others. We can't afford to just go on minding our own business and die without sharing such knowledge with others.

We will be questioned about that in the Realm of the Grave by the Malaikat's Munkar and Naqir! May Allah guide us, Ameen! 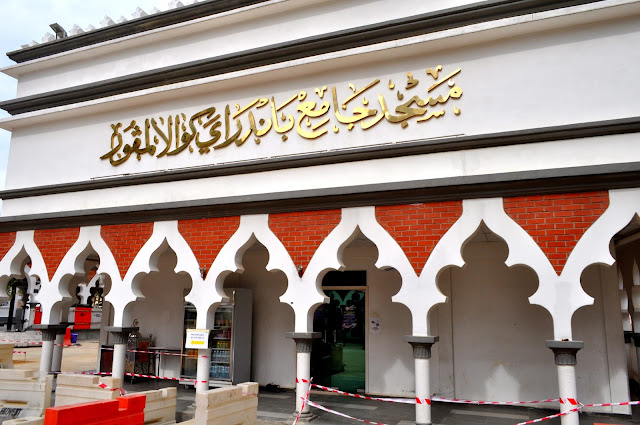 Will be sharing more photos in the next article. Insya Allah.
Published by MAHAGURU58 at 10:02 AM How are we to trust these fellows to be our next government if they keep pulling this stupid walkout stunt every time there is a Parliament session?

I am no fan of Najib Tun Razak and his legion of apple polishing Brasso Brigade ministers but the Malaysian Opposition's childish act of walking out of the Dewan Rakyat s tantamount to committing a breach of trust that the Malaysian voters placed on them by electing these sellouts to office.

This is not the way to convincing the Malaysian voters to trust them to form an alternative government in the coming 14th General Elections in 2018!

We need you to stand up and champion our causes and uphold what's right and fight against the wrongs being done in Malaysia! Not simply buckle under the slightest pressure and high tail it out of the Dewan Rakyat like this!

You are being paid quite a sizable allowance as elected Members of Parliament and enjoy many other perks as our MP's. Please earn your keep and do not repeat this stunt again.

Who else can we depend on to make things right in our nation that is suffering from widespread abuse of power and corruption?
Published by MAHAGURU58 at 12:34 PM